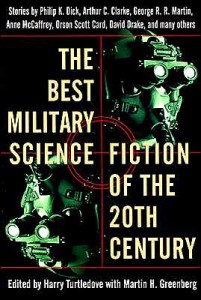 Maybe it’s the fact that some of the very first science fiction books I read were Joe Haldeman’s Forever War, and Robert Heinlein’s Starship Troopers, courtesy of my military father, but I’ve always had something of a fascination for well-done military style SF. It’s not one of my favorite genres, but the stories that stand out in it are some of the best I’ve ever seen. In the heat of combat, the stress of life-and-death situations, the true measure of a man, whether he be hero or coward, is brought to light. And in the thirteen stories contained in this collection, we indeed see the true measure of some wildly varied men, women, and children.

For me, the most recognizable story had to be “Ender’s Game” by Orson Scott Card, the story which was later expanded into a novel, and has since been followed by three sequels and two companions. There’s just something about watching an eight year old boy pushed to the absolute limit, beyond the breaking point, and unknowingly serving as the herald of victory for one race and the angel of death for another that’s always resonated with me. However, it’s in fine company, most of which I’d never read before.

From the curious almost-fantasy selection of Anne McCaffrey’s “Dragonrider” to
the apocalyptic visions of George R.R. Martin’s “The Night of the Vampyres” and Phillip K. Dick’s “Second Variety,” we get a taste for what the genre can offer us. Arthur C. Clarke’s “Superiority,” on the other hand, is a bemusing fable of how too much reliance upon superior firepower can actually lead to defeat.

Joe Haldeman’s “Hero,” which was the seed for the aforementioned Forever War, is likewise included, showing the bizarre and all-too-dismaying effects of a war that spans centuries in realtime, but mere months for those fighting it. From Poul Anderson we get “Among Thieves,” and from Gregory Benford, “To The Storming Gulf.” To round out this motley pantheon of writers, we have C.J. Cherryh, David Drake, Cordwainer Smith, Walter Jon Williams, and Harry Turtledove, who also edited the anthology, and wrote an informative, telling introduction that further explores the fascination we have with military SF.

Are these thirteen stories –the- best military science fiction of the 20th century? It’s not for me to say. Certainly, they represent some of the best published after 1950, nothing from before 1951 or after 1987. There’s any number of runners-up who might have served just as well or better. But in terms of providing a wide range, and accessing the potential of such stories, they serve quite suitably. If military science fiction, in whatever shape or form, appeals to you, there’s bound to be something to your liking in this collection.