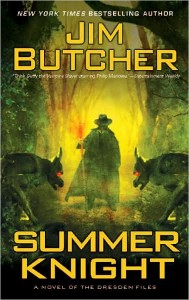 Some days, it sucks to be Harry Dresden. In fact, some months it’s a bad day to be the only practicing wizard in the Chicago phonebook. And this just isn’t one of Harry’s better months. Thanks to the events of the previous book, Grave Peril, his girlfriend has left him, the Red Court of the vampires has started a war with the White Council of the wizards, and just about everyone wants his head on a platter. He’s overworked, overstressed, and rapidly going broke, faced with imminent eviction from home and office. The vampires want him (dead), the wizards don’t want him (in general), and the only case to cross his desk involves a rain of frogs and the capricious, deadly Winter Queen of Faerie. It seems that Harry’s faerie (literally!) godmother has sold Harry’s debt to Mab, Queen of Air and Darkness … and Mab’s ready to start calling the debt in.

So here’s Harry. Broke, exhausted, unshowered, running on empty emotionally and spiritually, and Mab wants him to investigate the murder of the Summer Knight. Congrats, Harry, you’ve just become the Winter Emissary, and a pawn in a very nasty, very dangerous game of power and balance between the Summer and Winter Courts. And the only pay is the (dubious) gratitude of the Queen who owns you — and the eventual hope of a possible release.

As if that wasn’t enough, the White Council is meeting to discuss certain … issues involving the vampires — and the man they blame for it all, Harry himself. If he screws things up again, they’ll boot him to the curb and tell the bloodsuckers where to find him. He only has a few real allies on the Council, and none of them can help him in this matter. But hey, he’s used to this sort of thing. Harry works best when his life is on the line and the stakes are as high as they can possibly get. So all he has to do is interview the various nobles of the Summer and Winter Courts, survive multiple assassination attempts, convince the White Council that he’s worthy of their ranks, deal with the long-lost love who betrayed him years ago, and still find a way to pay his rent. No problem.

One of the most endearing, and compelling, things about the Dresden Files series is that the protagonist is a genuinely likeable, admittedly flawed, human being. He’s a wizard, with a lab and a talking skull, true. He deals with werewolves, ghosts, and faeries, yes. But where it matters, in his heart and in his mind, he’s Joe Ordinary, who’d really, really like to grab a beer and relax now and again. Harry’s no Gandalf, living in an ivory tower and appearing from on high to spout mystic sayings and dire portents. His Latin (the official working language of the White Council) is atrocious, his spells sloppy (as he says, he tends to slop power and go for overkill), his manners questionable (they said he had to wear a robe to the meeting… so what if his bathrobe was all he had?), and his standing in constant doubt (there’s still a little debate about the legitimacy of his “entrance exams”). He has to worry about clean clothes, rent, food, and car repairs, just like the rest of us. His romantic life is a shambles, and his friends like to hang out and game on Fridays … when they’re not growing fur and howling at the moon. Where it counts, Harry is the sort of character one can actually empathize with, and care about. When he’s happy, we feel it. When he’s angry, we know it. And, oh yes, when he’s exhausted, the feelings ooze from the pages, so that you’ll actually cheer when Harry finally gets a chance to shower and change clothes. It’s the little things…

The Faerie in this series are capricious, unknowable, powerful and downright scary, highly reminiscent of the ones in War For The Oaks or Tam Lin. The games they play really aren’t for mortals; to be caught up in their machinations is not something one hopes for. They mix sensuality and power, desire and terror, and manage to stay on the other side of familiar, so we’re never truly comfortable with them in the room. Where Laurell K. Hamilton thrusts us up close and personal with the Fey in her Merry Gentry series, and Mercedes Lackey removes a layer of the mystique in her Bedlam Bards series, Butcher keeps his creatures of Faerie on the outside.

Despite having four books out now, Jim Butcher is still a fairly new, up-and-coming author, who’s clearly still hitting his stride. That is to say, he’s moving from damned good to excellent, and from excellent to fantastic. Each book is self-contained, but building upon the ones before it, so that the long-time readers are rewarded time and again with new revelations about Harry’s past, new tidbits about the world he’s created, and new threats. There’s the feeling that something big is looming on the horizon, and considering what Harry’s already been through, it must be epic.

The Dresden Files is one of the best urban fantasy series out there, and if you haven’t tried it yet, I highly urge you to give it a shot. It combines the best aspects of fantasy, magic realism, and noir sensibility … as if Emma Bull and Ross McDonald had produced an illegitimate love child, and appointed Charles de Lint as his godfather.