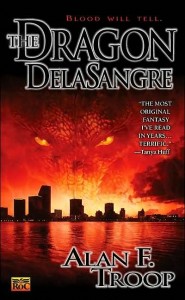 Hidden away on a small island somewhere off the coast of Florida, near Miami, is a deadly, dangerous secret. The island is called Caya DelaSangre, the Blood Key, and for over four centuries it has been the home of a unique family, the DelaSangres. Now reduced to a mere two, father and son, they are not normal people. Rather, they are dragons, shapeshifters who soar the skies, hunt humans to satisfy their predatory cravings, and manipulate the lives of mortals out of necessity and whim. Once they were pirates; now they are business tycoons, running powerful companies from afar and owning more than anyone realizes.

Dom Henri DelaSangre grows ancient and weak, and his son, Peter, chafes at the thought of losing his last relative to time and lethargy. Peter, young by dragon standards, is also reckless, foolish, and more intrigued with human ways than is particularly wise. He knows less of his people’s ways than he should. And it’s all about to come crashing in upon him.

A scent on the wind. A natural instinct coming to life for the first time. The knowledge that he is not alone, that out there somewhere is a female dragon just come to maturity. A chance killing of a random waitress. The treacherous plottings of a trusted underling. The vengeance of a grief-stricken brother. The headlong discovery of entire aspects of dragon life that had long eluded him. It’ll all come together, and Peter’s life will be changed drastically.

Vengeance and love will collide, and not everyone will survive the tragic, inevitable results. Peter’s family, such a sure and beautiful thing, will be threatened the most, and for all of his power and might, he may not be able to save those he cares for above all.

The Dragon DelaSangre is a powerful, passionate, gripping tale that brings dragons into the modern era, granting them all the mystery, eroticism, and danger of vampires and werewolves. Alan F. Troop assuredly makes his mark on the field with this, his debut novel. If he can keep it up, he’ll be an author worth keeping an eye on in the future. Just when you think dragons are overdone and nothing new can be said about them, this book comes along to challenge that notion and put it in its place. Don’t ignore this one.