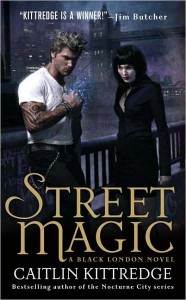 When she was sixteen, Pete Caldecott watched a man die, killed by the spirit she helped him summon. Twelve years later, still haunted by that disastrous night, she’s become a Detective Inspector with the London police. Caught up in the job, dealing with the fallout from a failed relationship, and on the trail of a kidnapped girl, Pete’s thrown for a loop when her latest informant turns out to be Jack Winter, the man whose death changed her life forever. Very much alive, angry with her for unspecified reasons, and strung out on heroin, Jack Winter is far from the man she knew, and their reunion is as acrimonious as it is unexpected. But they need one another, a fact which becomes clear after they find the first kidnapped child, only for several more to go missing. Someone’s stealing children and draining them of their spirits, and only Jack has the answers.

Their unlikely partnership rekindled, Pete and Jack take their searches into the hidden supernatural world of London known as the Black, where mages and sorcerers, fey and monsters dwell. But as Jack kicks the heroin habit, his supernatural abilities and psychic talents reemerge with a passion, threatening to drive him mad and take Pete along for the ride. Worse, powerful people are out to kill Jack for unspecified reasons, and they don’t mind collateral damage. Meanwhile, Pete’s own mysterious talents are coming into play. Can Pete and Jack stop fighting with one another over their shared past, long enough to deal with the larger problems at hand, or will this case end with someone dead for real this time?

Moody, atmospheric, and raw, Street Magic convincingly evokes a hard-edged, punk-spirited London, where trouble lurks around every corner and magic demands a price. There’s a heavy John Constantine (Hellblazer) (as written by Garth Ennis) vibe, infused with some of Gaiman’s Neverwhere and just a dash of Alan Moore for flavor. It’s rough, bleak, emotional and fast-paced, the sort of story which threatens to drag you under. Easily Kittredge’s best work to date, Street Magic doesn’t pull punches in terms of language, violence, or consequences. In a word, it feels real, for all that it’s a dark urban fantasy set in a world where the fey hang out in secret bars, secret sorcerous societies conspire against one another, and spirits linger long past their time. The emotional conflict between Jack and Pete is quite nicely done, as these two old friends don’t hold back while dealing with their various issues.

I loved Street Magic. It’s a hell of a read, and I’ll be eagerly anticipating the future adventures of our unlikely heroes. From what I’ve heard, Kittredge plans to keep putting Jack Winter and Pete Caldecott through the wringer. I expect it’ll be awesome. Kittredge may be American, but she’s put her heart into making this as convincing a Brit-flavored dark urban fantasy as possible, and it shows.