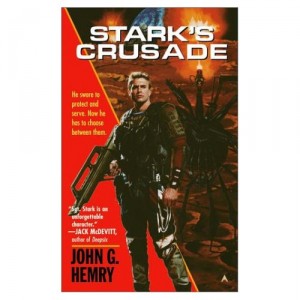 John Hemry concludes his exciting trilogy about Sergeant Ethan Stark, a man betrayed by his superiors and forced to go against the very system he stands for in order to do what’s right. He and the rest of the American forces on the Moon have successfully revolted against the military hierarchy and declared independence. Now they, and the civilians of the lunar colony, must work together or be destroyed by the numerous forces that want them back in line. Can the civilians and the military trust each other long enough to fight a war against the world that spawned them? Or will one side crack? If they can only last long enough, maybe Stark will save his people from the inevitable retribution, and make a change in the system.
Hemry has combined a keen sense of action with a fine look at the morality of following orders, and produced a groundbreaking story in the same vein as The Forever War or Starship Troopers. This is military science fiction as I’ve come to enjoy it, and I look forward to more from this author.