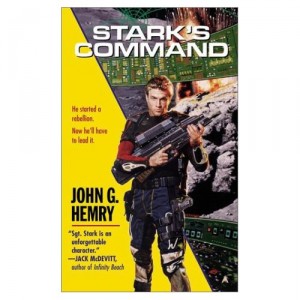 There’s the old saying, “If you want to do something right, you have to do it yourself.” There’s also the one about “putting your money where your mouth is.” Both of these sayings have just become quite relevant for Sergeant Ethan Stark, late of the United States military in the not so distant future. In the debut novel by John Hemry, Stark’s War, we watched as criminal stupidity, ineptitude, and negligence nearly annihilated a good part of the US military in a misguided attempt to seize the Moon’s resources for American interests. The end result of this ill-advised, disastrous campaign was a full-scale mutiny of the troops against their leaders, with Ethan Stark, the catalyst, being elected as leader pro tem of the newly independent forces. And as we start Stark’s Command, we find our erstwhile hero struggling with the new and unwanted responsibilities. There’s enemy forces to deal with, a civilian population on the Moon to negotiate with, and the inevitable retaliation from the American military. If one side doesn’t shoot him, the other’ll court martial and –then- shoot him. What’s an honest soldier to do?

Luckily, the soldier in question is Stark, and he’s more than capable of holding his own against all comers, even when they strike at those closest to him, and the attacks take on a myriad of forms. He has to secure his authority before his people can be torn apart, without repeating the same mistakes that lead to the insurrection in the first place. He has to cope with watching people continue to fight and die for no good reason, and to make an effective hierarchy out of low-ranking officers. It’s a challenge, but nothing he can’t handle, right? Well, if he can’t, things’ll be over before they’ve even started.

Once again, we’re treated to a fascinating, complex look at the military mindset. Hemry goes light on the science, and heavy on the characterization, combat, and military procedure as he delivers the second installment in this exciting fable about the near future. We may have reached the Moon, but we’re no more mature for it. Nationalism is strong, bureaucracy still a stumbling block, and we’re our own worst enemies. And if that’s not believable, what is?

Stark’s Command is a good book. Not quite as good as Stark’s War, but it also seems to suffer from “middle book syndrome.” It’s painfully obvious that this is “to be continued,” and in that regards, it ends on a frustrating cliffhanger. It can’t be read as a standalone very well, not with the questions left dangling. But as the middle book of a trilogy, it serves its purpose and tells a damn fine story. For those who like military SF, this book more than serves the purpose, clearly claiming Hemry’s place at the Round Table of military SF writers. I’ll be looking forward to see how he resolves the story, and what else he has up his sleeve.