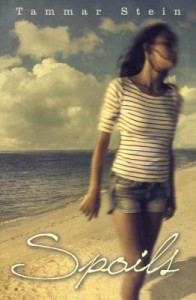 Money is truly the root of all evil in this somewhat imbalanced teen drama. Seven years ago, Leni Kohn’s family won the lottery–$22 million after taxes. Today, a week before Leni’s eighteenth birthday, the family is pretty much broke. Careless investments, wasteful spending, and too many generous “loans” have reduced their fortune to near-nothing. The family has one hope left: when Leni turns eighteen, her trust fund kicks in and she finally gets access to the million put aside just for her.  Everyone assumes that she’ll give it all to her parents, so the family doesn’t drown in debt. Even Leni assumes she’ll do what’s right for her family, no matter how much she dreams of using to pay for college or help the environment.

Then her older sister Natasha tells Leni that she made a deal with the devil for them to win the lottery, and the money is cursed, and Leni should get rid of it all. Leni’s about ready to laugh it all off as one of her sister’s odder quirks, until she starts getting visits from the archangel Michael, telling her to “fix it.”

Now Leni is caught in a vaguely-defined struggle between good and evil, trying to find the right path. She suspects it has something to do with Gavin, a brilliant young man with a checkered past, who’s come back into her life at an unexpected time. But how can she fix something when she doesn’t even know what she’s fixing? How can she justify depriving her parents of the money they need?  With the days until her birthday ticking down, can she find a solution?

I wanted to like this book a lot. Part of it stems from a fascinating premise, one grounded in reality. After all, how many times do we read about lottery winners who go broke or come to a bad end? How often do we see stories about the accidental millionaires who can’t handle their newfound wealth? Stein’s portrayal of the Kohns as a family ruined by success is painful, riveting, and poignant. The parents who build a needlessly luxurious mansion and throw extravagant parties and throw their money at poor investments and risky ventures. The older brother who blows his money on parties and traveling, until he ends up back at home, dreaming of better days. The older sister who can’t let go of her ex-boyfriend, who sinks her money into a tea shop.  And Leni, the sensible, idealistic one, whose money has remained in trust all these years until she comes of age.  It’s a powerful look at people who simply weren’t prepared for their fortune, and how it undermines their sense of self and corrupts their priorities.

So to put the story at the crucial point where Leni must decide what to do with her money? There’s the seed of a compelling, provocative tale. Her moral dilemma and internal struggle is really something to study. While money isn’t inherently bad, it’s clear that it’s an easily-misused resource. No wonder she’s conflicted about giving it to her parents, knowing it’s just a stopgap measure when they need to find a new way of handling things. And this is the story I wanted to read, in which Leni find a way to break the cycle and rescue her family from the pit of despair and debt.

So when I realized that this book also had a paranormal element, I honestly wondered if it was necessary. Did the book actually need this subplot regarding a vaguely-described deal with the devil, and ambiguous communications from an archangel?  Is it any stronger for having the supernatural quality in the background?  I don’t think so.  In fact, it’s a little distracting, even a little insulting, to be able to ascribe outside influences to such purely human elements.  Money doesn’t need to be cursed in order to lead to bad results, simple foolishness and greed can accomplish the same thing.

I know, I’ve never exactly been one to shy away from the paranormal elements in what I like. Urban fantasy is one of my favorite genres, after all. But sometimes, that element of the fantastic does more harm than good, and Spoils is a good example of a story that would have been perfect as a mainstream book.  It has everything already in place: a family in crisis, a conflicted protagonist, a suitably compelling romantic interest, and a complex moral dilemma that speaks to its audience. Given the economy of the past few years, money is never far from anyone’s mind.  Almost everyone plays the “what if we won the lottery” game and this is a starkly compelling cautionary tale.

As it stands, it’s really quite a muddle. Is the money truly cursed? If so, is it only cursed when the Kohns use it for their own benefit? Or will all those people they loaned/gifted/donated it to suffer equally miserable fates somewhere down the line? Otherwise, why couldn’t Leni have kept a little for herself, to handle necessities as opposed to frivolities, or would paying for school be selfish somehow?  There’s too much left unexplained and unspecified where her mission is concerned, and I’m still not sure how the chain of logic led her to assume that she had to help redeem Gavin’s life.  More of the hand-wavy paranormal bits, I guess.

In the end, Spoils is a fantastic book undermined by a few too many extraneous elements, which is really a shame.