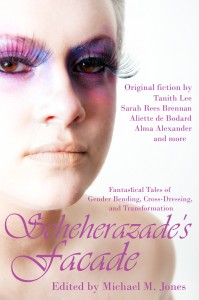 I know, it’s been a while since I’ve posted anything here.  What can I say?  It was the holidays.  Things happened.  There was family.  There was food. There were books. There were memories, and we will not speak of the things which make my in-laws point and laugh at me.

So then.  I have this anthology.  You might have heard of it.  Scheherazade’s Facade: Fantastical Tales of Gender Bending, Cross-Dressing, and Transformation.  It’s a little something I put together a few years back, and which then went through an epic freaking struggle to actually get published.  You know, the time-honored tale of “guy gets publisher, guy loses publisher, guy hits on every publisher in town, guy finds new publisher, guy gets crowd-funded, guy and publisher live happily ever after.”

Aaaaanyway.  Here it is.  Several months ago, Scheherazade’s Facade came out in its ebook format.  But now, at long last, after an epic journey of almost 4 years from the first proposal write-up until now, it is possible to buy the PRINT version of this anthology.  That’s right, it’s an actual, physical, hold-in-your-hands, put-on-your-bookshelves, use-as-paperweight, throw-at-the-cats, put-under-your-pillow, cuddle-it-and-call-it-George, BOOK.

(Brief pause while I Kermit flail.  I mean, holy crap, you guys.  I made an anthology.  An actual book.  Which people can buy and read and nominate for awards and review and show off to strangers and even though HUNDREDS of people were involved in the final outcome, my name is on the cover which means I DID THIS and I’m actually an editor and DUDE.)

(Sorry about that.  It’s been a long time coming.  My wife is amused, the cats are dismissive, but I have the spirit in me.)

Where was I?  Oh yes.  This book.  This beautiful anthology with words by Tanith Lee, Sarah Rees Brennan, Tiffany Trent, Alma Alexander, David Sklar, Aliette de Bodard, and so many other EXCELLENT authors.  You can buy it for real from Amazon, Barnes and Noble,and probably other places.  The trade paperback doesn’t seem to be on sale at Circlet yet, but give it a little time to update.

So order it. Read it. Love it. Review it. If you have the power to do so, feel free to nominate individual stories for awards. Nominate the whole anthology, I won’t mind.  (Keep in mind that the book totally came out in 2012 and is thus eligible for all such things.)  Spread the word.

But most importantly, enjoy it.  This has been a long time in the making, and I’m so thrilled to finally, officially, completely, thoroughly, share it with the world.  And the better it does, the more chance that publishers will trust me to commit anthology in the future, and that would be an awesome thing.

(And please, rest assured, all you Kickstarter backers who didn’t see the last update: your copies are coming as soon as Circlet’s office’s reopen next week. They need to recapture the office elves, who are allowed one week a year to run for their lives.)

I’ll close out with several reviews of the book.