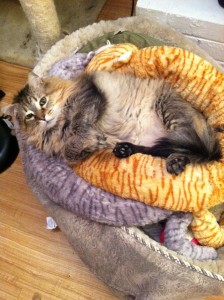 It is with great sadness, that I announce the passing of one of our cats.  Today, Gabriel LeFluff, the Drag Queen of Elfland, the Warmer of Cat Beds, the King of Owls, departed his current life due to kidney failure.  He was 16 going on 17, and will be greatly missed.

We originally adopted Gabriel as a kitten from the local animal shelter.  He was tiny, fluffy, sweet, and loving. He got over being tiny, eventually growing into a 20+ pound mass of fur and purr, thanks to his predominantly Maine Coon heritage. As a younger cat, he was prone to charging down hallways and into doors and cabinets with his signature “suicide trill.”  As he aged, he settled down to a luxurious life of sleeping, eating, and loving everyone. Nothing fazed him; he could sleep through any racket, ignore any ruckus, and greet any visitor with equal style and grace.  His headbutts could bruise shins, and he was capable of dragging an adult down to his level if he wrapped his dinner plate sized paws around you. 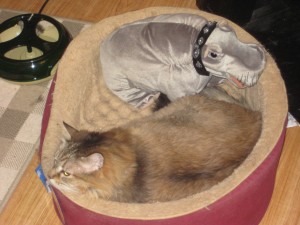 He loved the ‘nip.  When offered the container, he’d reach a paw in, and scoop out a huge pile, then roll in it. He was something of a paranoid, possessive, twitchy nip fiend, but he never lost his cool.  He was an amazing headwarmer when he was still capable of leaping onto the bed, and spent many hours while I was trying to sleep grooming my forehead.  Later, he became an equally amazing footwarmer when I was trying to work. He was fond of cat beds, to the point where he would sleep on a cat bed made entirely out of a stack of cat beds, like a pretty pretty princess.

Gabriel was an expert in telling us all about the owls.  “Owls, Gabe?”  “OWLS!  OWL-WOWLSS!” “You said it, brother.”  He also spoke fluent bird and squirrel. 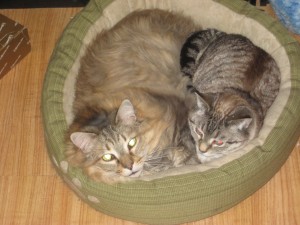 Gabriel also leaves behind several significant contributions to the literary field. He inspired author Seanan McGuire to get Maine Coons, and I’m told they’re doing quite well.  More importantly, he was the protagonist of my very first published short story, “The Spellweaver’s Tale.” Thus having achieved immortality in print, he was assured of a long and happy life.

He is survived by assorted other cats, and two owners who will miss him very much. However, he wouldn’t want anyone to be sad for long. That simply wouldn’t do with his philosophy of “shut up and pet me some more.”

Take care, Gabe.  May your next life be even better.