I am pleased, nay thrilled, to announce that more of my work is now out in the wild and available for your enjoyment and enlightenment.

First up is my brand new story, “A is for Anger,” which can be found in the anthology D is for Dinosaur, edited by Rhonda Parrish. While the title sounds pretty explanatory, I’ll share this excerpt to whet your interest. 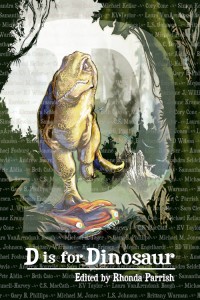 “Tanith Murray is always angry. Not the cool sort of angry that comes with superpowers, because at least then she could save the world and feel like she was making a difference. No, the awful kind of angry involving lots of yelling and slamming doors and hitting walls. The sort of angry where everything sets her off, from burned toast to an accidental bump in the hallway at school. The sort that always ends with bruised and bleeding knuckles.

She hates being sixteen and half-white, half-black and not fitting in with either race. She hates being poor, she hates being unattractive, unpopular, unloved. She hates the way she doesn’t fit in with her family. She hates the way everyone else seems so confident, so accomplished, the way they have their crap together when she doesn’t. She sees the world through the red haze of perpetual fury, stomping around like Godzilla and people scatter out of her way. She hasn’t hurt anyone yet, but everyone knows it’s a matter of time until punched walls become punched people, or worse.

At night, when she’s tossing and turning in the too-hard, too-small bed tucked into what used to be a storage space in the basement until she demanded she not have to share a room with her little sister, she dreams of something ancient and reptilian. It squirms inside her, restless and hungry.

In her dreams, Tanith rips at her skin, tearing away big flaky chunks to reveal green scales underneath. She picks and shreds and soon there’s nothing but a pile of Tanith-skin, of clothes and hair and everything that makes her her. Oh, and the dinosaur. There’s a dinosaur standing where Tanith used to be. It’s human-sized, whip-thin, built for speed and meanness all scales and tail and teeth, radiating menace and hunger.

Oh, she knows that supposedly dinosaurs had feathers and weren’t really green, or whatever, but Dinah, as she thinks of her dino-self, doesn’t care about scientific accuracy, she’s something dredged up from the foulest part of Tanith’s psyche, anger made real, and in her dreams, Dinah runs free.”

Does this one end in tears and bloody gibbets of people all over the hallways? Buy the book to find out.

Meanwhile, the audio market Far Fetched Fables has just released their adaptation of “Sea of Strangers,” which first appeared over at the short-lived but fondly-remembered Inscription magazine. This one takes place in Puxhill, my go-to setting for all of my favorite urban fantasy pieces, and stars the team of Audrey “Aud” Martinez and her girlfriend Charm as they try to figure out why everyone at school is acting so -weird- lately. Go read it for free at Inscription, and listen to it for free at Far Fetched Fables, then tell me which version you prefer! And an excerpt…

“There was a weird vibe in the halls before first period today. As I made my way towards homeroom, weaving between people with experienced ease, I picked up a thousand different emotions– everything you’d expect from a building packed to the gills with hormone-ridden teenagers and long-suffering adults– and something new, strange, and impossible to identify. A slippery, elusive, emotional flavor that tinted the rest without revealing itself. It poked at my subconscious, put me on edge, made me just a little careless. I bounced off a man-mountain wearing a football letter jacket, and got a snarled, “Watch it, lesbo,” for my troubles. The shove he gave me wasn’t gentle; I stutter-stepped away, trying to regain my balance.

It was going to be one of those days. Some people hate Mondays; this was proof that Tuesdays could be just as bad, given the opportunity.

Sometimes, it really sucks to be queer and out in high school. I blame the combination of pack and herd mentalities. Those who aren’t preying on the weak and different, are shunning those who don’t belong… and every group has a different idea of what’s appropriate. Unfortunately, when you draw a Venn diagram of “different” and “doesn’t belong,” the overlap tends to include people like me. The black-clad loner types with few friends and a thing for the same sex.”

That’s it for now. Remember, authors rely on word of mouth and reviews, just as much as they do on sales. So please, write a review, leave a comment, share on your Facebook, rate us on Goodreads.