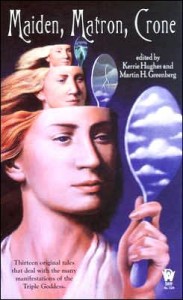 As suggested by the title, this anthology is a collection of thirteen stories all revolving around the age-old concept of the Three-in-One, also known as the Triple Goddess, or the Maiden, Matron (Mother) and Crone. Best associated with Wiccan beliefs, the Triple Goddess can nevertheless be found in any number of old religions and belief systems, such as the Greco-Roman family of myths. With that as their starting block, a baker’s dozen of fantasy authors have turned out some thoughtful stories.
In Brenda Cooper’s “A Lingering Scent of Bacon,” a teenage runaway has some unusual encounters along the way, leading her to realize that the journey is just as important as the destination, but regardless, she needs to know when to stop running. But who, or what, is guiding her steps and keeping her from harm?
Tanya Huff’s “Choice of Ending” revisits a popular secondary character from one of her earlier urban fantasy novels. Mrs. Ruth is an eccentric bag lady who just happens to be the current avatar for the Crone aspect of the Triple Goddess, accustomed to making sure people meet their karmic destinies. But how will she react when her time draws closer to an end? Will she go gently into the night, or will she kick and scream the whole way? The way she tackles the last moments of her life provide a fascinating coda to Huff’s earlier work, Gate of Darkness, Circle of Light.
Nina Kiriki Hoffman’s “Strikes of the Heart” follows a young woman whose unusual relationship with a spirit of nature has earned her the title of “plantwife.” As she watches her grandmother, a powerful magical defender for a kingdom, sink further into absent-minded carelessness due to age, Kishi must embrace an unexpected legacy.
Jean Rabe’s “Misery and Woe” is a story with a bitterly ironic twist to it. Though no longer young, the witch known as Elspeth finds her efforts to help a village hampered by her own considerable physical assets. Harassed by men too busy staring at her chest to hold a proper conversation and shunned by the women of the village for what their men are doing, Elspeth may not be able to save her new home from tragedy. Should she even try?
In “In Sight,” Charles de Lint follows a folk singer who’s found herself at a crossroads relatively late in life. When she meets a young musician just starting out on the same road, they may be able to share the wisdom, at least for a while.
Jody Lynn Nye’s “The Gift” is the story of a fickle young woman whose encounter with a goddess of the hunt helps her to realize what she’s been doing wrong in her relations with other people. “Bearing Life,” by Devon Monk looks at the widowed queen of a beleaguered kingdom, one who has to make some drastic, powerful decisions on the eve of her land’s potential downfall. To save her people and her land, what will she give up, and to whom?
Rosemary Edghill tells another story of her urban witch, Bast, in “Advice From A Young Witch To An Old Priestess,” recounting the earlier days of Bast’s time in New York and her introduction to Wiccan politics and ways. Alexander B. Potter’s “Opening Her Door” looks closely at a young man with a calling unusual for his gender. Called by the Goddess to serve her, will he have the strength to go against his family’s wishes, and his culture’s expectations?
Stories by Fiona Patton, Russell Davis, Jane Lindskold, and Michelle West complete this volume. All in all, I found Maiden, Matron, Crone fairly satisfying, even if some of the stories seemed to lose track of the theme (or at least not address it too specifically). Huff’s story is definitely one of the strongest of an eclectic mix. Rosemary Edghill’s story, like all of her Bast stories, barely skirts upon fantasy at all, leaving the supernatural aspects and their implications to the reader. However, I’d have to say that on the whole, there’s enough here to satisfy the theme, and some very good stories by top-notch authors make this worth checking out.