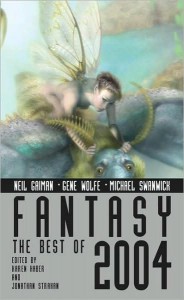 Fantasy: The Best of 2004, edited by Karen Haber and Jonathan Strahan (iBooks, 2005)
Science Fiction: The Best of 2004, edited by Karen Haber and Jonathan Strahan (iBooks, 2005)
That’s right, it’s that time of the year already, and the first of the “Best of” collections have started appearing on the shelves. I really must commend Karen Haber and Jonathan Strahan for managing to get this pair of anthologies out so quickly. As you can imagine, they’ve sorted through the hundreds of short fiction pieces published in 2004, and present for our enjoyment the stories they consider to be the best representation of last year’s highlights. Unlike some of the collections that will appear later in the year, these particular volumes only offer about a dozen stories for each genre, which leads to some interesting, and entertaining choices.
The Fantasy volume starts off with Neil Gaiman’s “Forbidden Brides of the Faceless Slaves in the Nameless House of the Night of Dread Desire,” a neo-Gothic tale which definitely wins out for longest title. Michael Swanwick, who appears quite regularly in these sorts of collections, is here as well with “The Word That Sings the Scythe.” It’s likewise no surprise to see Peter Beagle with “Quarry,” Gene Wolfe with “The Little Stranger,” or Robert Silverberg’s “The Sorcerer’s Apprentice.” The prolific Jay Lake is represented by “The Angel’s Daughter,” while World Fantasy Award winner Jeffrey Ford is in here with “The Annals of the Eelin-Ok.”
To finish things off are Kelly Link’s “The Faery Handbag,” Elizabeth Lynn’s “The Silver Dragon,” Tim Powers’ “Pat Moore,” and Deborah Roggie’s “The Enchanted Trousseau.”
For those keeping score at home, that lineup includes two stories from F&SF, two from The Faery Reel (edited by Ellen Datlow and Terri Windling), and three from Flights: Extreme Visions of Fantasy (edited by Al Sarrantonio.) Weighing in at one representative each are Lady Churchill’s Rosebud Wristlet, Realms of Fantasy, and Gothic! It’s always interesting to see where the best stories of any given year are drawn from, and I’m certainly not surprised to see Flights or Faery Reel included here.

Over in the Science Fiction volume, Gene Wolfe makes a second appearance wirh “The Lost Pilgrim,” while Joe Haldeman’s “Memento Mori,” James Patrick Kelly’s “The Best Christmas Ever,” Stephen Baxter’s “PeriAndry’s Quest,” and “The Voluntary State” by Christopher Rowe join it. Also to be found are “Three Days in a Border Town” by Jeff VanderMeer, “My Mother Dancing” by Nancy Kress,” “Elector” by Charles Stross, “Tourists” by M. John Harrison, “All Of Us Can Almost…” by Carol Emshwiller, “The Tang Dynasty Underwater Pyramid” by Walter Jon Williams, and Paolo Bacigalupi’s “The People of Sand and Slag.”
Originwise, SciFiction takes the lead with four stories, F&SF has two, as does Asimov’s. Analog, Amazing Stories, Polyphony 4, and The First Heroes (edited by Harry Turtledove) all have but one story each. The most unusual source, however, has to be “Tourists,” which was published on Amazon.com of all places. While the Fantasy volume was roughly half-and-half with regards to magazines versus books, the SF volume is split half-and-half between online sources and print.
Any “Best of…” collection is subjective. Were I to assemble a collection, it would undoubtedly be quite different. My tastes run to a different kind of story than many of those found here; if I’d placed money on which stories I’d see collected, I’d probably have to borrow cabfare for the ride home. But there’s no disputing that Haber and Strahan have assembled an excellent pair of anthologies, and you could easily use these two books to show off some of the most interesting, thoughtful, imaginative, or just plain out-there stories of 2004. Your mileage will vary, but I was quite pleased with what I found here. If you missed these stories when they first came out, now’s a good chance to catch up.