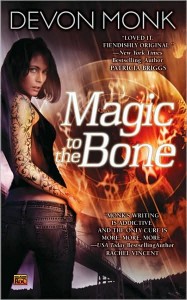 Ever since people found a way to use magic in everyday life, it’s changed the way things are done in the modern world, much like electricity did for the previous age. It’s used in manufacturing, entertainment, fashion, medicine and so much more. But for every use of magic, there’s a price to be paid, in blood or energy or pain. Some people take that price upon themselves. Others Offload it, legally and illegally, letting others bear the cost for them. Allie, estranged daughter of an important businessman, acts as a Hound, tracking those people who illegally pass along the pain and suffering to the innocent and unwary. Determined to make it on her own, she takes low-rent jobs, living from day to day, risking her life one job at a time. Every time she uses magic, she accepts the cost, even though sometimes it steals bits of her memory as well. It’s a living.

Then Allie is hired to find who Offloaded a near-fatal amount of magic onto a young boy. When she discovers that the culprit was her father, the hunt takes her back into circles she’d much rather have avoided. Her father’s death soon after the confrontation, in which he claimed undeniable innocence, leaves Allie on the run from the law as a suspect, unable to rely upon anyone save an old friend. Oh, and she’s saddled with an untrustworthy new ally Zayvion Jones, who worked for her father but seems determined to save her from her own mistakes. Now they’re caught in a race against the clock, trying to find who killed Allie’s father and pinned the blame on her, before the authorities, or someone worse, catches up. Meanwhile, something decidedly strange seems to be going on with Allie’s ability to channel magic, and it might just kill her before external forces have the chance. Will Allie pay too high a price for what she has to do?

Devon Monk’s treatment of magic as an everyday resource bearing a high price is a great idea, one that she explores to great effect through the course of the book. She’s really put a lot of effort into constructing this world, and so it works out quite nicely. There’s a convincing mystery running through the plot, tied in to the more personal nature of Allie’s struggle for revelation and survival, and it kept me coming back for more. Allie herself is a fun character, though I felt bad for the amount of anguish and suffering she went through as a result . . . you’d think there’d be a law against how much you can torture a character sometimes. Her budding chemistry with Zayvion Jones added another layer to the human element, and it was easy to root for the two of them. Especially when things take a particularly devious turn near the end.

Every time I think the urban fantasy genre’s maybe, possibly been explored to its limits, along comes another author with another neat twist, and occasionally, I have to sit back and wish I’d thought of it first. Magic to the Bone is one of those books, and I’ll be looking forward to future offerings in the series.