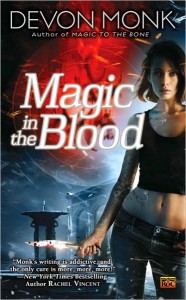 Ally Beckstrom’s last big job almost killed her; it put her in a coma, robbed her of a month’s worth of memories, and left her able to store magic in her body, something long thought impossible. It also killed the blossoming relationship she’d been building with the mysterious Zayvion Jones. In Ally’s world, magic has a price, and it’s usually a high one. But a girl has to eat, and what Ally does best is Hound – trace improperly used magic back to the source, tracking down those who’d abuse it for their own selfish and illegal purposes. So when the police ask for her help on a case, Ally takes the job.

Big mistake. Because things get weird in a hurry. Haunted by the ghost of her recently-dead father, stalked by magic-stealing phantoms every time she uses her powers, hounded at every turn by mysterious enemies and untrustworthy allies, and forever plagued with holes in her memory, Ally’s forced to draw more and more upon her own magic, an act which inevitably leads to pain and suffering. What she learns as she works the case is enough to shock her, and she’s been through a lot already. Everything she thought she knew about magic may be a lie. Her father may not be dead. Zayvion Jones claims to care for her, but does he have an ulterior motive? And what will the answers cost Ally this time?

Picking up some time after the events of Magic to the Bone, Magic in the Blood continues the trend of horribly abusing and torturing the hapless main character as she throws herself headlong into a never-ending series of deadly adventures. It’s a dangerous world out there, and Ally Beckstrom can’t help but see things through to the end, heedless of the price she’ll have to pay. Urgent and intense, chaotic and kinetic, the storyline doesn’t let up on our heroine one bit, knocking her down time and again until she fights her way to the end. Luckily, Zayvion’s there to act as an erstwhile ally, friend, and love interest, a man who knows Ally better than she realizes, thanks to her missing memories. It’s an odd relationship, and Monk took a gamble when she chose to erase her protagonist’s memories of the previous book’s events. It pays off nicely as Ally struggles to understand just what she’s lost, and work past it.

As always, the setting is an interesting one, full of potential and implications not yet fully explored. It’s nice to see a story where magic has a serious and tangible cost, and where every use needs to be weighed against the consequences. Ally’s own relationship to magic may be a bit worse than most, but it’s a neat setup, and as we see here, there’s more going on then meets the eye. With the introduction of a secret society dedicated to policing certain aspects of magic’s use, and the revelations uncovered here, it’s clear Monk is building towards a larger picture. Here’s looking forward to the next in the series and whatever new troubles it brings for the heroine.