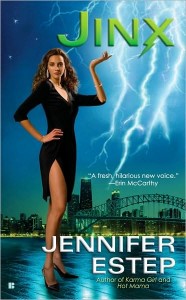 In the city of Bigtime, New York, superheroes and ubervillains are a common phenomenon, sightings of them almost routine. With costumed stalwarts such as the Fearless Five, Johnny Angel, Swifte, or even Granny Cane prowling the streets to keep them safe from all sorts of dangers, it seems like you can’t walk a block without tripping over one four-color character or another. Bella Bulluci knows this all too well; her brother is the current Johnny Angel, motorcycle-riding champion of justice, and thanks to his recent marriage to Fiona “Fiera” Fine, pyrokinetic member of the Fearless Five, Bella’s been tripping over superheroes left and right. Literally. Bella’s got her own superhuman power, an uncontrollable ability to manipulate probability for better or worse, and it’s been making her life miserable for as long as she can remember, with things breaking, burning up, or exploding at the most inopportune times. Bella wants as little to do with the superheroic life as possible, preferring to focus on her career as a fashion designer and occasional would-be artist. But what she wants is not what she gets, when the museum gala she’s planning runs into a few snags. Before she can blink, she has the teleporting playboy of Bigtime, Debonair, wooing her, and the vicious ubervillain known as The Hangman threatening her, with a priceless gem up for grabs.

Now poor Bella is right smack in the middle of the life she never wanted, struggling with a fast-growing attraction for the enigmatic Debonair, who’s definitely not all he seems to be. He’s got the hots for her, but what bizarre secrets is he hiding? And how can Bella ever bring herself to trust a superhero, when that lifestyle got her father killed and has brought her nothing but misery? Who is The Hangman, and what do he and his partner Prism want with the fabled Blue Sapphire? Can Bella overcome a lifetime of antipathy for superheroes, and her own uncontrollable powers, to help save Bigtime from possible destruction? Even with the help of the Fearless Five and Bigtime’s resident explosives expert, Bella’s going to be in for the adventure of a lifetime . . . and quite possibly a love affair like none she ever imagined. Will Debonair stop stealing paintings long enough to steal her heart?

Jinx is the third in Jennifer Estep’s surprisingly entertaining series about Bigtime, a city where comic book action goes hand-in-hand with romance and adventure. While the overall tone is somewhat light-hearted, it’s quite clear that Estep takes her comic book conventions quite seriously, borrowing all of the great tropes to flesh out her setting. From the prolific use of double initials for the main characters (Bella Bulluci, Devlin Dash, Sam Sloane) to the gizmos, gadgets and secret hideouts, Estep invokes old-school superhero comics, all the while avoiding any direct parallels to the big-name superheroes — no Superman, Batman, or Wonder Woman analogues to be found here. Speaking as a comic book fan, I could very easily see this setting work as a comic series. It may come off as a little hokey, even satirical, with characters such as Halitosis Hal, Cap’n Freebeard and his Saucy Wenches, or Granny Cane roaming the streets, but it’s fun and charming in its earnesty, and it holds together at its core. What more can you ask for a setting that juggles the double requirements of superhero comic books and romance happily-ever-afters?

The characters themselves are sympathetic and suitably complex. Bella’s a flawed heroine with some real issues to work out, but we get to see her change, grow, and work past or through them in the course of the story, even if it’s much like throwing someone in the deep end of the pool to teach them how to swim. What’s important is that her character is honest, and we can feel the pain and emotional struggles she deals with, from the loss of her father to her hatred of the superhero life to her hate/fear/uneasy acceptance of her power, to the conflicting feelings she experiences whenever Debonair is around. Debonair himself is a mixed bag of confidence and insecurity, charm and eagerness, style and image, and as we learn, he’s definitely got a lot going on below the surface. The chemistry these two exude when together is almost tangible, and Estep’s really given us a couple worth rooting for. This being a romance, and one with a comic edge to it at that, it’s pretty obvious what’s coming a lot of the time, especially where the ending is concerned. Luckily, even though some things are telegraphed from fairly early on, there are a few surprises that will likely catch even an experienced reader off guard.

I’ve loved this series so far, and have grown quite fond of the setting and the characters. Jinx is quite enjoyable, a worthy installment to the Bigtime Books. Estep demonstrates an admirable adeptness at blending genres, respecting the demands of superhero comics and romances without missing a beat, all the while maintaining a sense of humor. I hope the next book isn’t too far behind.