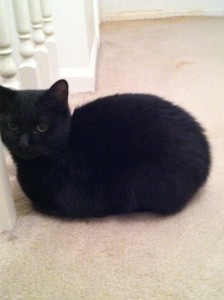 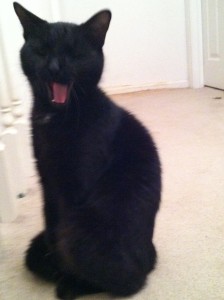 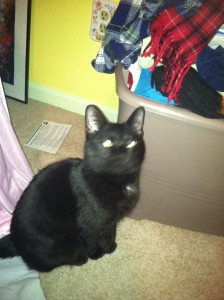 As promised, I hereby give you a cat post.

This handsome fellow is Virgil.  We found him in the adoption room of our local vet, while dropping in for routine matters.  It was love at first sight.  He was an instant charmer, purring and cuddling like there was no tomorrow.  I came back later in the day to finish said routine matters, and again spent some time with him.  For some reason, everyone yelled at me to just take him already, so I brought my wife by, and she informed me that we might as well sign the paperwork.

Well, we took him home the next day, and he’s spent the past few weeks getting used to us, the house, the other cats, and so on.  He’s anywhere from 7-12 months old, and utterly full of himself.  Fearless, active, inquisitive, persistent, and regal.  He leaps like a champion, eats like a trucker, swears like a sailor.  He’s fascinated by the toilet, baffled by dogs, and fights things with feathers.

I think he’ll fit right in.

By the way, he says you may refer to him as Your Majesty.