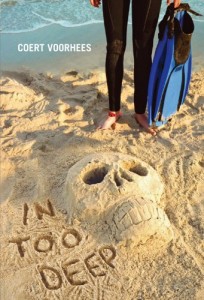 High school freshman Annie Fleet has several great passions: scuba diving, the mysteries of the ocean, and a crush on her schoolmate, Josh Rebstock. She finally gets a chance to get his attention when the two of them head to Mexico as part of a school field trip, a combination humanitarian and treasure hunting expedition.  With her diving expertise, she’s perfect for teaching Josh how not to drown in new and embarrassing ways.

Only the “Good Deeds and Golden Doubloons” trip isn’t what it appears. The teacher running it, Mr. Alvarez, reveals that he’s still a treasure hunter on the side, and he has a line on a fabled treasure, found and lost centuries ago by Hernan Cortes. The Golden Jaguar, conservatively estimated at $100,000,000. With his original crew unavailable, Alvarez cons Annie and her companions into helping him dive for the first clue in uncovering the resting place of the Golden Jaguar.

When Annie’s success is followed immediately by someone trying to kill her, she realizes that she’s on the right path.  But unable to trust Alvarez or anyone besides Josh, what she’s to do? Easy: round up her friends, call in some favors, and use every bit of her own resourcefulness and expertise to find the Golden Jaguar before the bad guys do. In a jetsetting adventure that takes her from Mexico, to Hawaii, to California and more, she embarks on a thrilling series of diving escapades.  And along the way, she even finds a little time to romance Josh…

I absolutely loved In Too Deep. Annie is resourceful, clever, determined, geeky, and adorable. Her combination of book smarts and survival instincts makes her a plucky, admirable heroine, the sort who could totally front an ongoing series. Coert Voorhees likewise surrounds her with a cast of engaging, entertaining friends, avoiding all of the usual annoying stereotypes one might expect from a teen drama.  By setting Annie and her peers at a school for the Hollywood elite—the sons and daughters of the rich and famous—it opens up doors to all sorts of opportunities.  You end up with Mimi Soto, former child actress who remains relatively grounded despite her fame and fortune, and Gracia Berg, daughter of a producer, who, rather refreshingly, combines looks and a hidden talent for computer games and programming.  (Say what you want, but it’s nice to see a character who’s not afraid to be pretty –and- let her geek flag fly, or a character who’s rich and confident and not a total jerk.)  Josh, son of an award-winning actress, proves to be complex and interesting in his own right.

The plot itself has just the right mixture of mystery, action, and exotic settings, lending it a cinematic feel which would be perfect should Hollywood ever decide to reboot the National Treasure franchise to star teenagers instead of Nicholas Cage. It’s fast-paced, yet episodic as Annie and friends follow the clues from one location to the next, giving them the chance to delve into more history and up the tension.  The way they utilize all their resources turns out to be pretty darn clever.

I may not know much about scuba diving, but Voorhees certainly makes it feel authentic, bringing the details and atmosphere with each trip beneath the water’s surface.

I don’t know if Voorhees has any sequels in mind, but I’d love to see more of Annie Fleet and her intrepid band of treasure hunters.  The seeds for future installments were laid down in this story, so one can only hope.  But even if this is a standalone, it’s a damned fine one, and one well worth checking out.