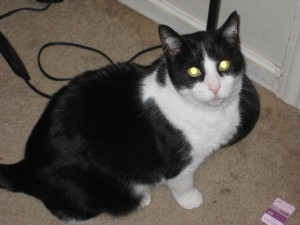 It is with a heavy heart that I announce the passing of Stucco, our oldest cat.  He put up a long and valiant fight against cancer, but ultimately yielded with grace and dignity when the time was right.  He was 17, and is survived by the rest of the pride, and two loving but heartbroken owners.

Stucco was born on Mary’s chem homework. She’d found a pregnant cat while at school, and took it home to be cared for. he cat, thus named Mince, gave birth, stuck around for 6 weeks, and then vanished out of a bathroom window, never to be seen again. Mary and I kept the one kitten, which my sister named Stucco for the way he clung to my shirt (my sister’s weird, don’t judge!) and he became my starter cat, the first in what has become a long line of cats.  He waged a lengthy war of wills against Mary, before agreeing to a truce: I could keep her, as long as he got to sleep on the bed between us. Mary yielded to him on all terms, thus cementing his place as one of the family.

Stucco was a cat of grace and poise, a vocal cat who waxed philosophical, an excellent cuddler and a relentless armrest. He kept the others in line. He loved cheese, mushrooms, macaroni and cheese, meat of all kinds, and never missed a chance to lick my plate. He was a friend, a counselor, a furry tyrant, and occasionally a muse.

He will be missed.  But we’re happy that he’s free from pain and indignity. See you in the next go-around, Dude.