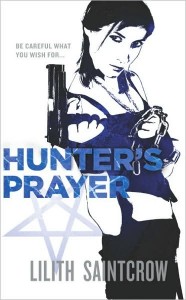 In Santa Luz, if there’s a Hellbreed problem or bizarre murder that needs investigating, they call in Jill Kismet. Hunter, exorcist, spiritual exterminator, kickass bitch, she wears many titles, not all of them complimentary. With her lover/partner, the werecougar Saul Dustcircle, she tends to cut a bloody swathe through anything that dares mess with her city. But big trouble is coming to Santa Luz, and Jill’s not prepared for the sheer scope of the problem at hand. It starts with the brutal killing and mutilation of prostitutes, and rapidly escalates when one of Jill’s oldest, nastiest enemies, shows up … apparently looking for her help. It looks as though a rogue member of the Sorrows, a widespread cult dedicated to the worship of ancient evils, is planning to summon a shadowy terror from the dawn of time, and Santa Luz is ground zero for the ritual. Jill’s going to have to draw upon all her resources to save the innocent people caught in the middle, and ally herself with several beings she truly hates and distrusts, in order to protect her city from the oncoming apocalypse. But what will this cost her, in terms of blood, energy, faith, and soul?

Hunter’s Prayer is the second in the Jill Kismet series, and compared to the first, Night Shift, it’s a major leap forward in terms of scope, quality, and epic asskicking. I found the development of the setting itself to be lacking in the first book; this has been rectified here, with Santa Luz gaining a lot in terms of feel, atmosphere, and presence. The city is a character in its own right, and I actually felt like the story was taking place in a specific location. The story itself is nonstop action, with Jill thrown from one crisis to the next in an ever-escalating, ever-messier series of battles and incidents until the final confrontation with the big bads.

One thing I really appreciated about this book was the use of unorthodox mythology. While there are werecreatures here, they’re not the focus, acting more as support and backgvround flavor for the most part. The real emphasis is on the various kinds of Hellbreed that infest the city, though most of them seem to exist just to give Jill something to kill in large quantities. In Hunter’s Prayer, we also get a good look at the Sorrows, Lovecraftian-style cultists with a decidedly nasty streak and no shortage of ambition where their dread gods are concerned. Combine all of those with the rather unique monster hunting Jill through most of the book, and you have something fairly new and interesting as far as the story’s supernatural elements go.

As always, Saintcrow packs a lot of character moments and emotional resonance into her work. Jill’s a damaged soul who tries to cleanse herself through extreme violence and who justifies making a deal with one of the city’s most powerful Hellbreed by counting the people she saves against the cost to her soul. She’s a fascinating study in contradictions, and it’s amazing she gets out of bed some days, even with the love and support of Saul Dustcircle (who remains, in many ways, an enigma even after two books). We get to see Jill’s gentler side (her empathy for the prostitutes and dregs of society) and her darker side (she enjoys killing pimps as much as she does Hellbreed) and in her mind, it all makes perfect sense. She’s as much hero as anti-hero, and someday that internal conflict is probably going to be her downfall. The strangest, most disturbing relationship continues to be between Jill and Perry, the Hellbreed who empowers her. Theirs is a violent, mutually abusive, mutually exploitive partnership, and it’s pretty much a given that it’s not going to end well at all. It’ll be interesting to see just what happens when one of them stops needing the other.

Hunter’s Prayer isn’t perfect by any means, but it’s a lot more satisfying than Night Shift was. Action-packed, with a nonstop plot that rockets towards an explosive climax, it’s a damned good read, one I was unable to put down. After Night Shift, I wasn’t sure if I’d continue with the series, but now I’m glad I did. At this point, I’m eagerly anticipating the next installment.