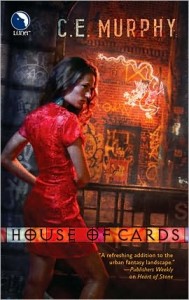 “We are here to tell you that there is strength in numbers, and that a balance has changed.”

With those words, a long-lost faction of the Old Races, those supernatural creatures which have lived among us for the length of recorded history, comes out of hiding, thus throwing the careful balance of the remaining Old Races into chaos and confusion. Not that things had been entirely peaceful before. Ever since the gargoyle, Alban Korund, revealed himself to human lawyer Margrit Knight, things have been spiraling out of control, slowly but surely. Margrit, nicknamed “Grit” for her tenacity and boldness, quickly became deeply embroiled in the strange affairs of the Old Races of New York City: the dragons and djinn, gargoyles and selkies and vampires. Now she’s known as a human who can negotiate with the representatives of the various races, unafraid and unwavering in her attempts to serve a greater good. She’s faced down the dragon crimelord, Janx. She’s stymied and opposed the vampire businessmen, Eliseo Daisani. She’s earned the goodwill of the selkies, romanced a gargoyle, and even stared down an angry djinn. Not exactly what she’s used to in her daily life as a lawyer for Legal Aid, that’s for sure.

But Margrit’s presence has set things in motion. She owes Janx several favors, and the dragon is aiming to collect, even as Daisani works things with an eye towards obtaining her services as a new personal assistant, a job which even Margrit understands to have more than its share of risks. The dragon and the vampire, rivals at best and enemies whenever the winds are right, at once again at war with one another, their pawns and human tools dying as casualties, and despite her best efforts, Margrit can’t help but get caught in the middle. And that’s when other factions make their presence known. Now, the representatives of the Old Races must gather for the first time in centuries, and Margrit Knight, a mere human, albeit one of unusual boldness and cunning, has a chance to alter their destinies forever. But what will it cost her? And how will all of this affect her love life, caught as she is between the safety and normalcy of a human cop on the one hand, and the exotic freedom of a gargoyle on the other? As things erupt in violence and fire, Margrit’s life will change forever.

House of Cards, the second in Murphy’s Negotiator trilogy, continues the fascinating story of the influence one mortal can make in a society of supernatural creatures. I’ll say it now: Murphy’s Walker Papers series, about an urban shaman, was very good. This series is nothing short of great. Her supernatural characters carry off a very nice blend of alien amorality and human fallibility, managing to exist beyond and above the laws of mortals without being completely removed from the day to day realities. Janx and Daisani in particular are complex, multi-dimensional, and unpredictable, pulling off their parts with confidence, dry humor, and just enough understated menace to make them believable as both allies and antagonists. One gets the impression that they’re amused by Margrit’s bravery and boldness (like if a kitten showed its fangs), and pleasantly surprised by her efforts to manipulate their own customs and personalities to get her way. Even immortals, it seems, can be jolted out of complacency.

This isn’t to make light of the parts played by the other characters. Alban, the exiled gargoyle who inadvertently brought Margrit into this mess, makes some hard decisions of his own, changing and growing as a result of his time spent with the feisty lawyer, while the resident djinn, Malik, shows his hidden depths as plans unfold and things get messy. The only one who really seems to suffer is Margrit’s occasional boyfriend, Tony, who mostly exists to stomp around, toss out coplike pronouncements of “If you’re dirty, you’re going down with the rest of them,” and sulking about the status of their relationship. It’s hard to find much to like about him under the circumstances, which is a shame.

The plot itself is fast-paced and always moving forward, and even though this is the second book in a trilogy, it doesn’t suffer from the middle-book syndrome, at least not so one would notice. Plenty happens, as the entire balance of the Old Races is upset and rules are changed. Characters live and die, alliances are made and broken, and a vicious power struggle leaves the status quo rather different from before, all leading to a conclusion that leave readers wanting more. I really did get a feeling of Big Things Happening, as events unfolded and the words I quoted at the start of this review were spoken. Murphy’s got a knack for suggesting Big Things Happening without resorting to pyrotechnics, just as her most dangerous characters manage to pull off the majority of their best tricks without pulling out their respective supernatural abilities. Daisani is a vampire who doesn’t need to drink blood on screen in order to convey a sense of age and power, and Janx exudes dragonlike qualities without breathing fire and flapping wings all the time, and yet you never forget, for all their playful demeanors, that they’re frighteningly capable and genuinely dangerous. Murphy understands when less is more, and it works quite well in this series.

I’ve read a lot of urban fantasy, or paranormal romance, or mixtures of both, and this series stands out quite nicely for several reasons. It utilizes nonstandard fantasy races such as the gargoyles and djinn, it has a heavy focus on the complex web of political and personal negotiations and entanglements, and it relies on plot over romance to keep things moving along. The engine that keeps the story going is one of checks and balances between the major characters, while the romantic aspect is a subtle undercurrent that keeps the engine lubricated, if that makes sense. At any rate, I thoroughly enjoyed House of Cards, and I’ll be eagerly awaiting the third in the series.