↓
Home Menu ↓
Skip to primary content
Skip to secondary content
Home→Reviews→Private Investigators→Hunted By The Others, by Jess Haines (Zebra, 2010) 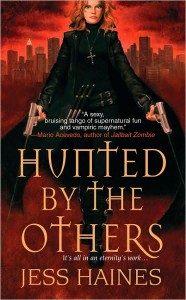 Shiarra Waynest is a private investigator who’s about to get way in over her head. Hired by a representative of the mage Circle to determine whether or not a local vampire is in possession of a certain magical artifact, she’s not at all sure she wants the job. Normally, she avoids the Others like the plague, but the money for this case is way too attractive to pass up. And that’s how she gets stuck smack-dab in the middle of a three-way struggle between mages, vampires, and the anti-Other vigilante group known as the White Hats. People will die, she’ll assemble a team of friends and allies, risk her life, and make a new name for herself as someone to be reckoned with.

You know? Hunted By The Others is a perfectly serviceable urban fantasy with the requisite hint of forbidden romance. It hits all the right beats as it turns its main character from someone who doesn’t want anything to do with the supernatural into someone who can kick ass with the best of them. By the end, she’s a walking, talking, bad girl cliché, decked out in her black leathers and armed with a magical stake-holding belt and dual laser-sight-equipped handguns and so forth. She has a werewolf ex-boyfriend, a vampire who might be her new love interest or her worst enemy, and somehow, it all seems kind of … well, generic. I read this book, I enjoyed it, and the details promptly slipped my mind. It’s not bad, but it’s not great, and there’s the problem: with so many urban fantasies out there already, you have to be great if you want to stand out. By far, the best thing about this book is the striking, attention-grabbing cover.

If you’re in the mood for something quick, easy, and relatively harmless, you could do far worse than to pick up this satisfactory series opener. I’ll most likely be back for the sequel, and hopefully it’ll make more of an impression on me than this one did.