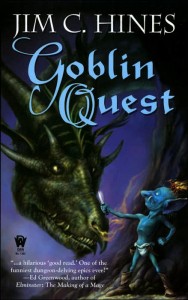 You know, it sucks to be a goblin. Small, not all that bright, pretty much condemned to live underground, and nothing but cannon fodder for every Tom, Dick, and Arthur Adventurer that comes questing for treasure and glory. It sucks even more if you happen to be Jig, who’s one of the smallest, most hapless members of said goblin race. He’s scrawny, puny, near-sighted and a target for bullies.

All of this, of course, leads him to being placed on guard duty at exactly the wrong moment on the wrong night, when an all-new group of adventurers comes a’visiting. Before he knows it, Jig’s been captured and forced to serve as a native guide for these people as they journey deep into the tunnels that stretch below Jig’s home, down into the bowels of a magic-carved mountain, in search of the legendary Rod of Creation.

Now Jig has to contend with a pathetic elven thief, a pompous sword-wielding prince and his erratic magic-using brother, and a dwarf priest, as the unlikely group navigates through danger-filled tunnels, defying death on a constant basis. They’ll have to deal with hobgoblins, trolls, bats, spiders, the walking undead, an insane necromancer, and each other. That’s before they even get to the dragon, which reportedly holds the Rod of Creation. Believe it or not, Jig is the one with the most common sense, the best sense of self-preservation, and the one most likely to survive under pressure — especially after he makes a deal with a long-forgotten god who’s willing to take on a goblin as a worshipper. (Sometimes, even a goblin is better than nothing!)

Goblin Quest is definitely not your traditional fantasy. It’s a skewed, hilarious twist on epic quest fantasy, turning things upside down and showing them from the viewpoint of the cannon fodder. All of the usual troops are here: warriors, wizards, dragons, dungeons, quests, goblins, and so on, but nothing is exactly as you’d expect. Sick of those formulaic epic fantasies? Goblin Quest is the exact opposite of them. It reminds me heavily of Eve Forward’s Villains by Necessity, which likewise showed a fantasy quest from an unusual viewpoint. I had a great deal of fun following Jig as he took control of his own destiny, and I look forward to future installments in his story. Goblin Quest is a very welcome breath of fresh air, and a great addition to the comic fantasy genre.