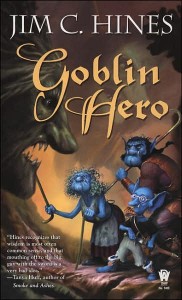 Jig the goblin is back, and this time he’s getting a little hell from his . . . well, goblins don’t have friends. Let’s call them allies. If allies are prone to stabbing you in the back, or shoving you down a well, or feeding you to a dragon. Yeah. Jig’s in trouble, as usual. He thought he could go back to a nice, quiet life after his last unwilling adventure, but he was wrong. Threatened by Jig’s newfound usefulness and ability to heal (courtesy of the not-so-forgotten god Tymalous Shadowstar), Kralk, the goblin chief, sends him on a “mission of mercy” to the rival ogres, who specifically requested Jig’s help. Seems they’re having trouble of the magical variety, and they need a Hero of the Jig sort. So off Jig goes, accompanied by Graf, a goblin almost too stupid to live, and Grell, who’s spent untold years caring for goblin young. Following them in secret is Veka, a would-be goblin Hero and her reluctant hobgoblin ally, Slash.

Ultimately, this motley band of unlikely champions have to journey deep into the depths of their mountain home in order to unravel an insidious plot that could destroy them all. Because it seems when Jig slew a dragon and defeated a Necromancer, he accidentally opened the path for an even worse threat to enter this world, and their newfound enemies won’t stop until everything inside the mountain is enslaved or dead. For this challenge to be met, everyone — goblin, hobgoblin and ogre — will have to work together. Worse, they’ll have to do it under the dubious leadership of Jig, who eventually (and accidentally) assumes the role of goblin chief. This is definitely a recipe for disaster, especially after one of Jig’s so-called allies changes sides. . . .

Goblin Hero is the entertaining followup to the first in the series, Goblin Quest. Once again, Jim C. Hines turns the fantasy world on its ear with this insightfully hilarious look at the traditional cannon fodder of the genre. They may be small, vicious, and untrustworthy, but Hines proves there’s more than enough cunning and resourcefulness in your average goblin to carry quite the enjoyable story. Hines deconstructs the role of the epic fantasy hero masterfully, keeping things light without ever actually crossing into outright parody, as would be tempting to do in this situation. Jig, the extremely reluctant protagonist, shows more virtue in his basic survival instincts and common sense than most traditional fantasy heroes ever muster, so you can’t help but root for the little guy. Hines walks a fine line between self-aware fantasy and comedy, and succeeds in presenting an honestly enjoyable story, mixing adventure and humor. If nothing else, Goblin Hero succeeds in giving us a new kind of protaganist, whose allies are as much a hazard to him as his enemies are. This is a fantasy for those weary of epic quests and seven-book-long sagas.