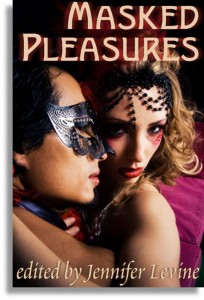 Grace whistled, low and impressed despite herself, as she took in the sheer decadent splendor of the ballroom.  It was chock-full of the city’s elite, the rich and powerful, mingling and drinking and indulging in various vices, a gathering unlike any other held all year long.  On any other day, half these people would be arguing with, ignoring, or dueling the other half.  On any other day, they’d be dignified, maintaining their courtly manners and aristocratic demeanors.  On any other day, they’d be unmasked … and wearing somewhat more clothing.  But on the night of the Devil’s Masquerade, all bets were off, no hunger too perverse and no desire too extreme.  Here in this House, on this night, the people who ran the city were encouraged to indulge, as per ancient pacts and promises made to those who’d inhabited the land long before humanity settled here.  And so the nobles danced and drank and fucked with wild abandon, glittering eyes framed by physical and social masks, their identities politely hidden even as they bared their bodies and souls.

It was early yet; the real debauchery didn’t get going until after the Devil’s toast at midnight.  Sure, hands wandered along exposed skin, lips trailed lovingly over a stretch of shoulder, and the darkened corners were already occupied with writhing, tangled bodies, but this was nothing.  Once the glasses were lifted and the lights all but extinguished, the wild revels would be underway.

Grace and I had no intention of being here that long.  We’d never seen a Devil’s Masquerade before.  Partly because it wasn’t for the likes of us, and mostly because we had way too much class.  We kept our vices out in the open, and indulged like honest people.  Technically, our authority gave us the right to be here, but realistically, it wasn’t something that ever actually happened.  Short of murder and rape, there were very few laws that could be broken or enforced on this night.  If we made a spectacle of ourselves, blew our cover, it was likely more than a few attendees would take offense to our presence.  And not just because we’d pissed them off in the past.

Unannounced and unnoticed, we meandered through the crowd, side by side as if tied together. This was not a crowd in which we wanted to be separated.  Time and again, Grace bumped my hip with hers, or jabbed me with an elbow to get my attention.  “Lady Northgate really shouldn’t wear that color,” she hissed with evil glee.  “Especially not while draped over – Is that Magistrate Gabriel?  His hands aren’t where I think they are – oh, they are!”

I shushed her quickly.  “Ours not to wonder why, ours not to give a damn.  You know why we’re here.  Now hold still.” I laced my arm in hers, letting her balance me while I called up my Witchsight.  The room shimmered and blurred, the assembled masses of the city’s elite becoming prismatic silhouettes, their emotions and thoughts flickering within them like so many bonfires.  Unsurprisingly, greed and lust and gluttony dominated everything else; even those of more virtuous natures, like the aforementioned Magistrate, were indulging themselves tonight.  Also unsurprising were the spells woven into the very fabric of the room, sorcerous cobwebs scattered over every surface to prevent eavesdropping, scrying, and other outside intrusions.  Dressarie House took privacy and security very seriously, as befitting its status as the city’s premiere brothel and discrete meeting spot.  I saw beauty charms and protection spells on many of the individual guests, anchored to their masks and jewelry, and a few questionable-yet-legal allure charms, but nothing to cause alarm.  What I didn’t see, however, was the telltale crimson aura of a sex demon.

A sex demon.  Believe it or not, even the Devil’s Masquerade had standards, and incubi/succubae were strictly on the do-not-allow list.  But one had been stalking the city for weeks, and everyone from the Duke on down was rightly confident that the demon couldn’t bear to miss out on the fun and opportunities of such a night.  It was like putting a buffet in front of a starving man.  So a breach in the magical protections had been arranged, while two of the Duke’s very best – that being Grace and myself – were sent in undercover, armed with magic and steel, with the understanding that if we ever talked about what went on tonight, there’d be trouble.  The sort involving boiling oil and wild dogs, I assumed.

To read more, you can buy Masked Pleasures wherever fine ebooks are sold.  Or I might be able to provide a copy for review purposes. It can’t hurt to ask, right?