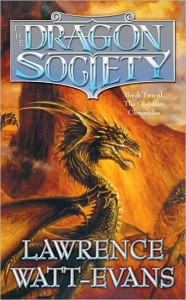 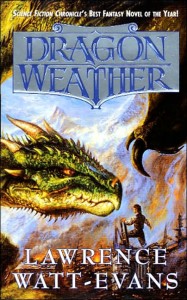 What can one boy’s oath for vengeance do to change the world? And how far will he go to see his oath fulfilled? That’s one of the driving themes behind Lawrence Watt-Evan’s fantastic new series the Obsidian Chronicles, the second book of which has just been released.

It all starts with Dragon Weather, that hot, oppressive time when the air itself seems to stifle, temperatures rise, tempers flare, and the dragons venture forth from their lairs to rain fiery destruction upon the lands of Men. Once, they ruled the world, reptilian tyrants of unimaginable might, darkness and fire made flesh. Nothing could kill them. Nothing could stop them. Mankind fought back, but to little avail until a truce of sorts was reached. For seven hundred years, the dragons have slumbered beneath the mountains, coming out only sporadically for their own reasons. So long as they restrained themselves to destroying a village every few decades, and left the rest of the lands of Men alone, all was well.

That is, until they destroy the mountain village of Obsidian, leaving behind one survivor, a young man named Arlian. And in that attack, he is changed forever. Swallowing a mixture of blood and dragon venom, he’s imbued with their power, becoming one of the rare immortals known as dragonhearts. He will live forever, immune to poisons and intensely charismatic. He will rule the world from secrecy with the other dragonhearts. But that’s years in the future. For now, he’s still but a boy, orphaned and subsequently sold into slavery, condemned to a life in the mines.

He swears vengeance. Against the dragons which destroyed his home, slaughtered his family, shattered his life. Against the men who looted his ravaged home. Against the cruel overseer of the mine. Against the mine’s owner. Against the cold man with the scarred face who rescued him from the ruins of Obsidian and sold him into slavery. Arlian will live for no reasons other than revenge and justice.

Escaping the mines after seven long years, he makes his way into the world, finding safety and refuge in the House of Carnal Society, a whorehouse run by rich and powerful lords. When he discovers the true nature of what goes on their, and who has part-ownership in it, his world is again shattered. The House destroyed, the women who befriended him scattered or killed, Arlian adds six more names to his growing list of those destined for his vengeance.

Gifted with the power of the dragonheart but still not realizing it, he becomes immensely successful, ultimately getting enough money and power to reinvent himself as the eccentric, flamboyant, and deadly Lord Obsidian. With his faithful aide, steward, and boyguard Black at his side, he enters the treacherous world of the Dragon Society, those dragonhearts who seek the companionship of their own kind. One small problem, though. He’s sworn to kill five of them for the parts they’ve played in his life. And Arlian, now Obsidian, will stop at nothing. He’ll duel in the streets, shatter the Society from the inside, and pursue men across the world to see his oaths fulfilled. He’ll make friends, but many more enemies, and risk his life again and again to rescue the women he’s lost, and see them avenged with a certain single-mindedness that convinces many he’s mad.

Ultimately, Arlian will pursue the deadliest of them, the ancient sorcerer known as Lord Enziet, or Lord Dragon, right into the heart of the dragons’ territory. He’ll learn what awful secrets Enziet has held for seven centuries. He’ll discover the two most dangerous things in the world: how dragons are created, and how they might be killed. Information the dragons will go to war over, information that could destroy seven hundred years of semi-peace. But Arlian will see justice done.

In Dragon Society, Arlian returns to the great city of Manfort, having seen his greatest opponent vanquished at last. Another name on his list can be crossed off. Six women from the House of Carnal Society now reside with him, freed from their former masters. He’s become obscenely rich, and he knows things no man alive does. Now he can continue his obsessive quest to rid the world of dragons and their evil once and for all.

However, there’s more to it than that. Enziet, who once opposed Arlian to the death, has left him everything. His centuries of research, his home, his obligations, even his role in dealing with the dragons. Before Arlian can use what he knows, he must put affairs in order, and deal with this legacy. For the dragons are coming, and will again engulf the lands of Men in fire and death and destruction. Only Arlian has the tools to kill them, and the knowledge, and it will tear the Dragon Society apart. Intrigue and politics have nothing on three dozen odd centuries-old men and women who have just been told their immortality has both a price, and a time limit after all. Some will ally themselves with Arlian. Some will oppose him. Some will die horribly.

As Arlian races to get his weapons made, he has to contend with bitter rivals, political maneuvering, the increasing pressures of his station, and the oaths he swore long ago. Will he stay true to himself and die, or betray himself in order to serve the larger good? To what lengths must he go to prove that dragons can, indeed, be killed? The time of dragon weather again draws nearer, the dragons themselves stirring and readying themselves for war. They’ll stop at nothing to destroy Arlian if he doesn’t rally the Duke of Manfort, the surviving members of the Dragon Society, and his other allies in time to dstroy them first. Even if they do succeed, war is still on the horizon….

It’s quite clear at the end of Dragon Society that a third book is on its way, to put a capstone on an epic tale of morality, revenge, justice, ambition, power, and responsibility. Thus far, we’ve been treated to a luxurious, in-depth examination into what drives a man through adversity. Arlian’s growth and evolution from ignorant youth, to embittered and driven young man, to confident warrior, also allows us to see the darker sides of such drive. Innocents suffer and people die as a result of his quest. Though he serves a much larger good, the questions constantly arise. Can he do it? Should he do it? What gives him the right to do these things? Why should anyone else go with him? Why sacrifice centuries of experience and life for something that -might- happen? Who will help rule the lands of Men if he destroys the secret society that has been pulling the strings for so long? Should he abandon his quest and bury his knowledge, if it’ll keep the dragons in their caves? Is he truly mad with his obsessions? What will people do for immortality? He faces all these and more.

This exploration of right and wrong, good and selfishness, justice and vengeance, plays out against a fascinating backdrop where magic is genuinely disturbing, and dragons are ancient, conniving engies of pure destruction with nary a known weakness. They’re not familiar, they’re not friendly, they’re deadly and shadowy, so that when they do make their appearances, it’s with all the power and terrifying might possible.

In short, Lawrence Watt-Evans has a winner here, and if the third volume in the series is as good as the first two, it’ll be one of the best classical fantasy stories in quite some time. It’s intense, but well-paced, complex without confusing, and entertaining without sacrificing its introspective nature. I highly recommend Dragon Weather and Dragon Society. If anything, they’re even better than his Ethshar series