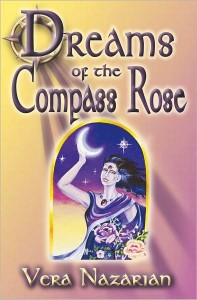 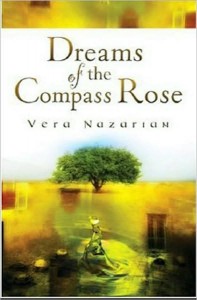 In the shifting sands and tempestuous oceans of the lands of the Compass Rose, all the secrets of the world are hidden. They twist and turn and intertwine in a complex, delicate dance throughout the ages, coming full circle time and again. The dreams of gods and the lives of mortals overlap, and the death of a culture is the birth of something entirely new.

This is a world of desert empires, bold bandits, prideful princesses, faithful-unto-death followers, age-old oaths, immortal ships, and magic. Vera Nazarian has captured a rare and special kind of beauty in the tales that make up the entirety of Dreams of the Compass Rose. Fourteen stories in all detail key moments and players in the long and intricate history of the Compass Rose and all its many realms, from the mysterious island of Amarantea which floats at the edge of the world, to Livais, the city of blasphemers which is transformed into pure gold; from the slain realm of Risei which births a goddess, to the Kingdom of the Middle which holds ancient secrets; from the insanely shifting city of No-Sleep where the dreams of its ruler determine its very nature from day to day, to the End of the World, which is both nearer and further away than anyone could ever guess.

We’re introduced to an ever-changing cast of characters whose paths crisscross through the ages, transforming from man to god to legend to myth and finally into mystery. Ris the Trickster, who is both goddess and mortal, messiah and trickster; Nadir, whose faith in intangible things leads him into a lifetime of servitude under and beside a cruel dark princess; Lero, insane captain of the Eye of Sun, who bargains with gods for her ship’s invulnerability; Belta Digh, who forces a negotiation between brash mortals, and Death herself; Annaelit, the Teller of Tales, who discovers the true price for mocking the gods; Yaro, who risks madness during Carnival when she confronts the Lord of Illusions; Prince Lirheas, who makes a decidedly odd choice for marriage and thus buries the seed for what will one day be called Amarantea; the mighty _tagavor_ who conquers the known world, slays an entire race, and begins an age-old cycle of mystery and treachery; the brilliant woman called ‘you with the knowing eyes’ who in truth discovers the secret about the extent of the world’s reach. These people and more are interwoven together through the centuries, from the earliest days of a desert empire, to the far-flung days when all that remains is an ocean and legends.

Each story is a gem in itself, a self-contained modern myth with a certain unique flavor. It’s as though the lands of the Thousand and One Nights had collided with the worlds of L. Frank Baum, producing a story cycle with an Ozian undertone and an Arabian accent. Take one story at a time, and savor the rich language, the images, and the archetypical characters which populate it. Read them all, and trace the patterns of man vs god, truth vs illusion, reality vs legend, appearing over and over in different guises.

Vera Nazarian’s choice of words is exact and haunting, from the “ocean of steel and mauve sun-glitter upon cool waters” to the “pungent flavor and fable” and all points in-between. Most importantly, she’s crafted the sort of stories to which you can return over and over, discovering new nuances every time, stories which remain in the forefront of the conscious mind long after you’ve closed the book. This is not an easy or quick read, but rather something to be savored and enjoyed, taken a little at a time so that each new portion dissolves on the tongue.

It took me several readings of some of the stories before I truly got it, but once I opened myself up, I understood the artistically decadent way Dreams of the Compass Rose was crafted, and after that, I couldn’t get enough. It possesses the same mixture of subtlety and blatant imagery as any dream, and can be as kind or cruel as the gods of old. If these aren’t stories taken from actual myth, then they surely detail a history of the world we lost along the way. This is a book well worth the price.