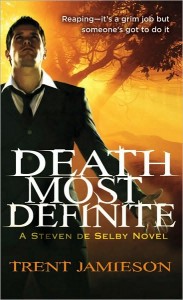 Some folks have a nice, boring, safe office job. Not Steven de Selby. He’s a Psychopomp working for the Brisbane office of Mortmax Industries, and he puts the dead to rest, lest things between the mortal world and afterlife get out of hand. Hey, it’s the family business, and he’s not too bad at what he does. And then, suddenly, it all goes horribly wrong.

Warned of an attempt on his life by a dead girl, Steven quickly discovers that someone is killing Australia’s Pomps, slaughtering them without mercy or reason. As friends and family alike fall before the relentless onslaught, Steven runs for his life, accompanied and guided by Lissa Jones, the dead girl he’s quickly falling for. As the Pomps die, the restless dead grow plentiful, unbalancing a system that’s been in place for untold centuries. Soon, angry spirits are reanimating the corpses of Simon’s loved ones, and they’re out to snuff him like a candle. Simon’s struggle to survive will take him beyond the veil of death, and into a confrontation that could change his life forever. All this, and he’s in love with a girl he can’t even touch, for fear of losing her forever. That office job sounds pretty good now, doesn’t it?

Death Most Definite, the start of a new urban fantasy series, is a recklessly exciting adventure. It starts with a gunshot and ends with an apocalypse, and tears through the streets of Australia and the depths of the afterlife with equal abandon. It’s a tragically romantic comedy, a metaphysical fantasy, and a whole lot of fun. Simon and Lissa make for an adorable couple, possessing excellent chemistry together despite their uniquely improbable circumstances. Jamieson’s put a lot of thought into the world presented here, where mortal agents help spirits pass on after death, fleshing it out with mythology and bureaucracy. This is definitely a case where I can’t wait to see what the author has planned next; the ending of Death Most Definite sets up a very interesting new status quo for all involved, and the promise of much more to come.