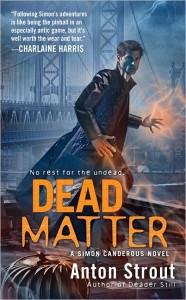 So. Simon Canderous, psychometrist and agent for New York City’s Department of Extraordinary Affairs, is up to his usual tricks. You know, preparing to enjoy Taco Night with his ex-evil cultist girlfriend, when he’s forced to bash the hell out of an unidentifiable supernatural monstrosity while in the grocery store. Then he has to rescue his partner Connor Christos from a graveyard incident, which doesn’t make much sense because Connor’s supposed to be taking vacation for the first time in years. Gargoyles, ghosts, and grave dirt, oh my.

Before he knows it, Simon’s knocking on the door of the new Gibson-Case Center, after pursuing the mysterious person he catches stalking outside Connor’s window, and that in turn leads to the first authentic, no-joke, we mean it this time, vampire encounter the DEA’s had in years, which in turn leads to the revelation that Connor’s brother isn’t dead like he thought, but is really a bloodsucker, and hey, there’s an entire colony of them hidden in the middle of the city, and oh by the way, the building eats people, and some of the vampires may be degenerating into unidentifiable supernatural monstrosities, and …

Why yes, Simon Canderous does lead an unusual life. Even for a New Yorker. Now his girlfriend’s been absorbed by a high-tech building, Connor’s being seduced by the dark side, and Simon himself is being accused of collaborating with the enemy just because he’s adopted a radical new “talk before stake” policy where these vamps are concerned. Taco Night is on indefinite hold, until things are straightened out. Or else.

As you might guess from the description, this is one seriously oddball book, the third in an increasingly strange and entertaining series. There’s this constant undercurrent of fun running throughout the storyline, as our hero finds himself dealing with one sort of weirdness after another, all while coping with the insidious threat of bureaucracy. The spiritual successor to Men In Black and Ghostbusters, this book mixes action and humor, magic and sharp characterization to deliver a fast-paced good time.

As always, I love the odd couple of Simon and his girlfriend, Jane. He’s an ex-thief psychometrist who uses his powers for good most of the time; she was an evil cultist for the health benefits until she joined the DEA, where she’s only slightly less evil. Together, they’re both cute and semi-disturbing, and pleasantly happy together. It makes for a nice change from the series where the protagonist has to juggle multiple suitors of various races, or where they spend all of their time angsting. It’s nice to have at least one relatively stable, if quirky, couple doing their thing in between (and during) times of crisis and monster attack.

I’ve come to look forward to Strout’s books, and he keeps getting better. This is a keen example of how to stand out in the urban fantasy field and maintain a unique identity, and I hope Simon Canderous will be around for a while.