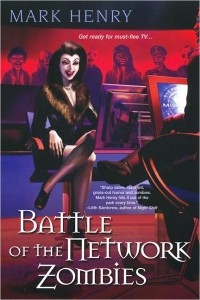 In a perfect world, Amanda Feral, Seattle’s favorite zombie fashionista, socialite, and trouble magnet, wouldn’t have to worry about a thing. Her nightlife would be nothing but fruity drinks and tasty college boys. Think again. Her business is in dire financial straits, the reapers who patch her up after every misadventure are snarling for their money, her werewolf boyfriend is more of an animal in bed than is comfortable, and her mom’s a strip club-owning vampire. When a chance to at least settle her money woes comes up, in the form of judging a reality show, Amanda reluctantly accepts the deal. However, the prompt murder of the show’s sexy, obnoxious host (and chief draw) means a quick change in plans for all involved.

Now, Amanda has to figure out who killed Johnny Birch, the world’s most annoying wood nymph. Was it the voodoo mama? The Belgian ghoul? The Japanese smoke ghost? The twin sirens? The drag queen werewolf? Everyone has a motive, the means, and the opportunity. But will the would-be contestants kill each other before Amanda pins down the culprit … or will the fact that she’s a lousy detective mark the end of her glamourous unlife? Some people would die to be on TV, even the secret supernatural channels … and some will die whether they want to or not.

Profane, demanted, and utterly warped, Battle of the Network Zombies is the third in Mark Henry’s series about the trials and tribulations of Amanda Feral, a foul-mouthed flesh-eater who navigates the Seattle supernatural social scene like a less evil Paris Hilton. With a wide variety of bizarre mythological creatures strutting their stuff here, and Amanda’s customary amusing asides, anecdotes and footnotes, it’s clear that Henry’s really tapped into his inner (undead) diva once again. While not for the sensitive, easily-offended, or delicate of heart, this book skewers the reality show mindset even as it cooks up a surprise-filled murder mystery. The chapter headings, each one offering up a TV Guide-style listing of a cable show for the supernatural set, are uniformly entertaining (I’d watch Thanks For The Dismemberments, or Jersey Devil House Party!), and I can certainly appreciate the use of lesser-known mythological creatures as secondary characters. For some, this series may be an acquired taste, but it’s certainly got a unique style and voice, and Battle of the Network Zombies lives up (or down?) to the standard set by the first two books.