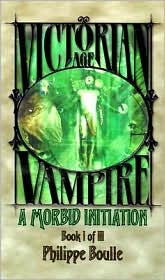 (Being the first volume of three, in which we uncover many a mystery, are introduced to an enigmatic and most secret society of night-walking fiends, and enjoy the company of a lovely lady of noble blood as she descends into the depths of darkness.)

It can hardly be denied that the Victorian era, that span of years wrapping itself around the last few decades of the 19th Century, was a time when science and mysticism clashed, producing an odd amalgamation of unlimited possibility. Interest in the occult was high, a fascination with death and romance was prevalent, and practitioners of the scientific and medical arts often performed unspeakable acts in the pursuit of knowledge. It was a dark and strange time, or so our imaginations like to claim; a time when anything could happen when no one was looking. An era when the British Empire sprawled across the world, already eating itself from within. It was the era of Gothic horror, of mad scientists and monsters, of Doctors Frankenstein and Jekyll, of Jack the Ripper and the Elephant Man, of gaslight, fog, and secret societies. It was the age of Dracula. It was the time when vampires made an eerie transition, from things of nightmare to creatures of a darkly romantic persuasion.

White Wolf Publishing made its mark on the gaming industry with its first release, Vampire: The Masquerade. Over a decade — and hundreds of supplements — later, Vampire has come back to its roots with the new game line, Victorian Age Vampire, in which players may take on the roles of inhabitants of that literarily fascinating age, whether as vampires or as something else. And to go along with that line, White Wolf’s fiction arm has released A Morbid Initiation, the first book in a trilogy that explores some of the vast potential of the setting.

Regina Blake is not a woman given to silly flights of fancy. At least no more so than the average wellbred young lady of the time. But she cannot deny that something most peculiar is transpiring. After two years of illness, ever since an unexplained series of events in Cairo, Regina’s mother has, at last, died. But not of natural causes. Oh, no. A conspiracy is afoot, and it all seems to tie in with her mother’s strange, terrifying relatives, who make inexplicable demands, who refuse to let the body be touched by sunlight, who insist upon interring Emma Blake in their own ancestral cemetery. Regina knows something is wrong, and she enlists the aid of her soldier fiancé and his friends to investigate. What they find changes them forever.

As Regina delves deeper into the odd circumstances surrounding her mother’s last days, she is both protected and guided by the enigmatic, beautiful Victoria Ash. Together, they follow a labyrinthine path deeper into the shadows. Deeper into a night-dwelling society that crosses all social boundaries. Deeper into something very old, and very dangerous. Vampires do exist, and they pull the strings of the world. Regina must walk among them, for hers is not a path easily turned away from. And little does she know, but her dearest love, Lieutenant Malcolm Steward, is likewise a pawn in a game of chess that stretches back for centuries….

What price will Regina pay to find the truth about her mother and her mother’s family? Where will her quest take her? And what does Victoria Ash have in mind for them all? Alas, dear reader, for not all questions are answered in A Morbid Initiation. Nevertheless, it’s a fair wager that enough curiosity will be piqued by the first book in this trilogy to warrant staying the course.

I’m rather familiar with the White Wolf game settings. However, for this book, I attempted to approach it as an outsider, and I can say, quite happily, that A Morbid Initiation stands quite well on its own merits. By making the point-of-view character completely ignorant where vampiric society is concerned, Philippe Boulle avoids the contempt of familiarity. The various secret societies, both mortal and supernatural, are presented with appropriate mysteriousness, never fully revealing themselves. As Regina travels further into the shadows, we too travel with her. As she is initiated into their world, so too are we. As a result, A Morbid Initation feels like a vampire novel, not like a piece of fiction based on a pre-existing property. This pleases me, as very few things are as annoying as a clumsy book wherein one can see the source material from a mile off.

The book also manages to convey some of the dark eroticism, both of the vampire world, and of the Victorian age. The whole romanticized image of the Victorian era suggests a certain sexual and emotional repression that carries with it a need for release, a release one finds often in these Gothic novels. In short, Victorians frustrated, vampires sexy, you do the math. Boulle manages to inject some of that passion into the story, without making it irrelevent. Rather, it comes at a climactic moment, if you can pardon me the expression.

Overall, I was extremely pleased with A Morbid Initiation. It evokes the proper atmosphere, and remains true to the source material without relying overly heavily on it. While it may not be entirely historically accurate, it does capture the feel, the essence of that time period. Vampire fans would be well advised to take a look at this one, even if they don’t care about the game line that inspired it.