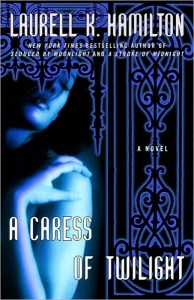 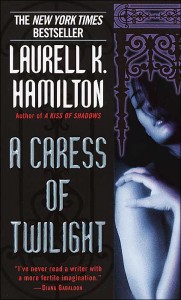 For a while, she was perfectly happy to be Merry Gentry, part-Sidhe private detective working for the Gray Detective Agency in Los Angeles. That was before her family came looking for her, and her true identity was revealed to the world. Princess Meredith NicEssus, heir to the Unseelie Court, Princess of Flesh, American royalty if any existed. Now Merry has to juggle the discomforting attentions of fame and the political machinations of her own kind. It’s not enough to ignore them and hope they’ll all go away, preferably starting with dear Aunt Andais, Queen of the Unseelie; they’ve drug her back into their world kicking and screaming. Andais has declared that either Merry or her insane cousin Cel will inherit the throne, but contigent upon who has a child first. Merry knows for a fact that she’s dead should Cel take the throne; her only chance is to get pregnant first. Luckily, Andais is all in favor of such an endeavor. To that end, she’s loaned Merry a few of her guards.

Now Merry has to handle a real life and occupation in the daytime, while at night she partakes of the pleasures of the Sidhe. Doyle, Frost, Nicca, Rhys, and Galen. All Sidhe, all warriors, all people she trusts and could grow to love. But only one will be the father of her child. Only one will become her husband and King should she take the throne. And Merry has to choose between love, duty, and power, never knowing when the game will be over.

All the while, she has to gather strength, make alliances, and marshall her resources, for whether she becomes Queen or not, she’ll need powerful allies by her side. She’s already secured the temporary loyalty of the goblins, but must struggle to keep them. She must bargain with the capriciously deadly demi-Fae for loyalty and for the cure to a curse plaguing one of her companions. She has to tread carefully amongst the Unseelie, for a single misstep could ruin everything.

As if that weren’t enough, an exiled member of the Seelie Court seeks her help, and the King of the Seelie has set his sights upon Merry for unknown reasons. Worse still, ancient and devastating magics have been let loose, leaving dozens and hundreds of corpses in their wake. Merry certainly has her hands full, anyway you look at it, and the worst is yet to come…

A Caress of Twilight is dark and rich, as beguiling as a Sidhe glamour and as intoxicating as a poppy field. Blood and sex, desire and pain, need and fulfillment, lusts and loyalty all come together in a decidedly risque tapestry. This is not a fairy tale for the faint of heart, prudish of morals, or innocent of soul. There are those who might say it focuses a little too much upon the physical, sexual aspects, but Hamilton does an excellent job of weaving them into the storyline, making them integral to the plot, development, and very atmosphere. In the world she’s set forth, passion is power, and blood is potent.

If I had any complaints about the book, it would be that the climatic scene at the end seems to arrive rather quickly for the buildup it’s gotten throughout the course of the story, and seems to be resolved just as quickly. Though it’s an intense scene, multi-layered and complex, it seems to be over rather swiftly, with a rather diminished sense of wrapping up loose ends, while leaving plenty of room for the inevitable sequel. While it could be read as a stand-alone, it’s obviously part of a series, and meant to be treated as such. I’m looking forward to the next book, just to see how things progress from the status quo the author’s set up. There’s a lot left to be resolved, and questions to be answered. That aside, this was a book worth staying up late to finish.