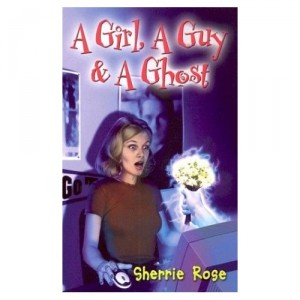 In the mood for something a bit more light and fluffy? You can’t go too wrong with this offering from Dorchester Publishing’s new “Smooch” line of teen romances. It practices truth in advertising: the title pretty much gives away the premise. You have Traci Nettleton, nice normal everyday teenage girl. Then you have the handsome quarterback Brad Davidson, her current object of lust, who, happily, likes her back. There’s only one thing that can stand between them. Corky, Traci’s former best friend, who’s been dead for two years, only to return as a ghost, capable of sending e-mail messages and pulling pranks on the living. His timing leaves something to be desired. It’s going to be hard for Traci and Brad to form a relationship when a jealous ghost is on the loose. Throw in all the usual distractions (such as Traci and Brad’s feuding single parents) and you have a teen romance with a supernatural twist. There aren’t too many surprises to be found here; by its very nature, it’s somewhat formulaic. However, it’s a nice change of pace from books with Meaning and Relevance, and sometimes you just need a feel-good book. Keep your expectations low, and you’ll be pleasantly surprised.