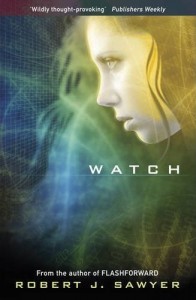 Blind from birth, 15-year-old Caitlin Dector underwent an experimental procedure designed to grant her sight. It worked, in a fashion; with the aid of a device she calls her “eyePod” she can receive and decipher the same visual cues as everyone else. She can also see the data flow of the Internet, visualizing its existence like no one else. This made her uniquely suited for first contact with the so-called Webmind, a spontaneously emerging consciousness existing only on the Web. Even as Caitlin learns to see the world around her for the first time, the Webmind, which can see and hear what she hears through the eyePod, is learning alongside her.

As more people learn of Webmind’s existence, some accept it with trepidation and optimism, others with fear and worse. How will they deal with an alien mind capable of knowing our secrets, able to spy on us and manipulate the Internet, existing everywhere and nowhere? The Webmind can’t stay a secret for long, and the time for it to choose its purpose for existing is approaching far too quickly. Is it here to help, or harm?

Like the first in the trilogy, WWW: Watch unfolds through a variety of narrators, including Caitlin and Webmind, but also spilling over to more peripheral characters such as the government agencies who stumble across Webmind’s existence, and a primate researcher engaged in interspecies communication. Everyone has their role to play in this story, and the threads all begin to connect, showing us how we’re all connected. From America to Canada, Japan to Israel, the pieces come together as Webmind’s intelligence and experience grows in leaps and bounds, and its sense of self solidifies.

There’s no middle book syndrome here; Robert J. Sawyer packs as much thought and development into this volume as he did into the first, turning out a compelling, thought-provoking entry in one of his best series to date. He’s one of those few writers who can be equally at home dealing with characters’ personal lives and tackling the hard science in an accessible way. Sure, there’s a lot of infodumping between characters, and some of it ranges all over the place — he hits upon game theory, morality, religion, George Orwell, Star Trek, autism, Japanese military history, and so much more — but these discussions rarely feel out of place. I suppose it’s because Sawyer’s careful to populate his books with intelligent, articulate characters who can talk about those sorts of things like some of us would discuss sports, but under the circumstances, it works.

WWW: Watch is probably as accurate and sophisticated an exploration of emergent consciousness on the Web as we’re ever to find until the real thing happens. Grounded in the pop culture and online trends of the moment, it feels authentic. It’s optimistic, intelligent, and I can’t wait for the third in the series.