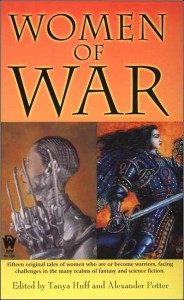 As this title suggests, the common denominator is that each of the fifteen stories within focuses upon a female, be they soldier, warrior, or innocent caught up in times of war. Thus, we’ve got a mixture of military science fiction, fantasy, action, and girl-power.
Some of the authors take the opportunity to visit previously-established characters. Sharon Lee and Steve Miller give us a short story exploring the pre-military life of Miri Richardson, who plays a major role in their Liaden Universe books, in “Fighting Chance,” and they show us how the headstrong young woman joined up in the first place. Tanya Huff drops in on Staff Sergeant Torin Kerr, heroine of her Valor books, in “Not That Kind of War.” It’s a short but sharp piece that exposes the characters to the pointless brutality of a quiet war. Bruce Holland Rogers’ “The Art of War” puts a human defense group up against an implacable, indecipherable enemy which lays waste to entire planets. It’s up to one woman to figure out the strange secret of the alien attackers before they destroy yet another world for no reason. In “Elites,” by Kristine Kathryn Rusch, one old veteran has found a kind of peace in running a halfway house for other vets, those women who just can’t escape the trauma of their military service. However, is our heroine as well-adjusted as she thinks she is, or has she yet to find her own healing?
While there are some very good stories in here, including ones by Jane Lindskold, Rosemary Edghill, Julie Czernada, and Stephen Leigh, I must confess that many of them didn’t really catch my fancy, making this a case where I skipped over more stories than I like. However, it’s still a strong selection, both of authors and of themes addressed, and I definitely found some stories that made me think.