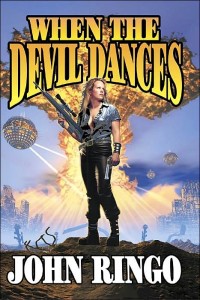 In the third book of John Ringo’s exciting series, the stakes have been raised once again. The alien Posleen have been on Earth for five years now, and we’re losing, badly. Civilization is down to a few scattered pockets in the mountains, and the remnants of North America. However, we’re fighting back tooth and claw, determined to make their victory a costly one. Luckily, we’ve got alien technology of our own, plus sheer human stubbornness, on our side. Between dirty guerilla warfare, powered battlesuits, and mountain-sized mobile artillery, the remaining humans will do anything to make the Posleen miserable. Unfortunately, they’re getting smarter the longer they deal with us. It’s up to Major Michael O’Neal, as well as the amnesiac intelligence officer Anne Elgars, and Sergeant Major Mosovich to mount resistance where they can. And to die holding the line in the worst-case scenario. It may not be enough, but they won’t go down easily.
John Ringo has really pulled out all the stops in this book, guaranteeing that however the series winds up, it’ll do so with a conclusive bang. The ideas keep getting bigger, the battles more desperate, and the payoff more rewarding. The only drawback is that it flows better as a series than as individual books, with long sequences devoted to certain characters while others nearly vanish for much of the book. Overall though, this is a great representative of military science fiction, and a series worth looking at.