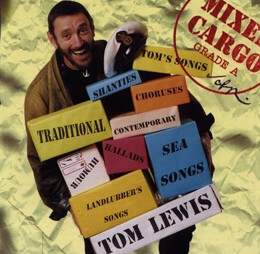 Draw yourself a pint, settle back on your wooden stool, and get ready to sing along with this inspired, if not entirely lively, collection of sea shanties, ballads, and choruses.

You want this reviewer’s honest, snap judgement? This CD gave me a headache within five minutes, and it didn’t improve much after that. Tom Lewis has a lovely, deep voice, and I can easily picture him belting forth old favorites in a crowded tavern while the tide rolls in somewhere off in the Pacific Northwest. I can also picture a tavern full of drunken sailors all joining in. Unfortunately, when they did that, I’d be down the block and gaining speed. Need I mention that this isn’t my usual bag, baby?

To be fair, though, it’s a great effort. As I’ve said, Tom Lewis has a rich voice, and he certainly knows his stuff. Once I overcome my initial dislike of the material and concentrated on the positive aspects, I found it growing on me little by little. I fear I’ll never be a fan of this type of music, but my experience hasn’t traumatized me so far.

Let’s assume you are a fan, and you’re fond of a capella sea shanties and grown men accompanied by harmonicas and accordions. This CD boasts an interesting assortment of “shanties, sea songs, choruses, traditional, humour, ballads, landlubber’s songs, and Tom’s songs,” if the cover art is to be believed. The sources range from traditional and Rudyard Kipling to Tom Lewis himself. For the most part, they’re treated as a solo effort by Mr. Lewis, either a capella, or with the aforementioned musical accompaniment. That, I believe, is both the CD’s greatest strength as well as its biggest failing. There are places where a few more voices might have smoothed the effort and made it more palatable to the ears… but on the flip side, we get the full effect of Lewis’s talented vocal ability and his love of the medium.

One song that does stand out, even for me, is the one entitled “Showers,” words and music by Tom Lewis, a humorous ditty about why no one showers on a submarine.

All in all, I found this to be a mixed effort. On the one hand, it’s well put-together, and the technical aspects are high quality. It gets an A for effort. On the other hand, it fails to be anything other than a very nice collection of shanties. Unless you’re already a fan of the artist or the material, it’s even odds as to whether this is the collection that’ll win you over. It didn’t succeed with me. The next time they pull out the accordion and ukelele, I’ll be heading for dry land.