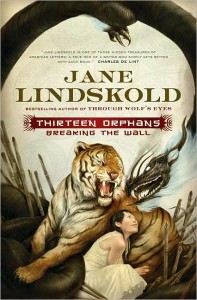 Brenda Morris never thought her father was anything more than a charismatic huckster with some odd friends. That is, until he takes her on a business trip while she’s away from college for the summer, and tells her some hard-to-swallow stories. How once upon a time, thirteen magically-gifted people were exiled from a mysterious place known as the Lands Born From Smoke and Sacrifice, and how he’s descended from one such person, having inherited the mantle of the Rat. How eleven of the others, each named after an animal of the Chinese zodiac, are scattered around the country, living in secret as they protect the last member of their company, the Cat, descended from their exiled emperor. How they’ve encoded a magical system, capable of offense and defense, within the tiles of mah-jong. And how Brenda is likely to take up her father’s role as the next Rat someday.

All of this is hard to believe, but Brenda becomes a rapid believer after a series of events throw everyone into confusion. An unknown attacker is stealing the memories — the very essences — of these gifted people, leaving behind mere shells of the men and women they used to be. Soon only a handful are left: the Tiger, an elderly actress; the Dog, an ex-soldier only recently come into his own; the Rooster, a talented sorcerer with little battle experience; the Hare, a young mother with a child to keep safe; and Brenda herself, untrained and inexperienced but apparently possessing some of the Rat’s power. This handful of relative strangers has to come together quickly, under hostile conditions, to unravel the mystery of their attackers and rescue the souls of their lost comrades. But when one of the enemy falls into their grasp, they discover that things are even more complicated than they originally anticipated. And the battle has just begin.

Breaking the Wall, the first book in Lindskold’s ambitious new urban fantasy series about the Thirteen Orphans, is one of the best things I’ve seen from her in quite a while. Drawing from Chinese history, mythology, and astrology, she’s created a fascinating new setting, one that straddles two very different worlds. While we only see Earth this time around, I have no doubts that we’ll visit the Lands Born From Smoke and Sacrifice (and what a story there is behind that name) in books to come. She also gets points for the system of magic introduced and explored here, one that uses the symbolism of mah-jong to great effect. It’s new and different, and suits the story perfectly.

Lindskold has also set us up with a nice ensemble cast, which makes for some interesting conflict and development along the way, and I’d be hard-pressed to pick a favorite from the lot. While Brenda may be the point of view character, there’s no doubt that her companions (and her enemies) all have their own stories to tell. The Hare’s daughter, Lani, certainly steals the show whenever she’s on screen. I am definitely interested in seeing where these characters go, and what happens to them in the long run.

All in all, I really think Lindskold has a new hit on her hands. With its skillful blend of magic and adventure, exotic influences and complex characterizations, Breaking the Wall is an excellent start to the new series, and sure to appeal to urban fantasy fans in search of something different from the usual fare.