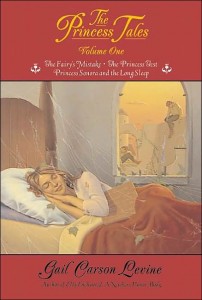 Gail Carson Levine revisits three favorite fairy tales, and reinterprets them with a wry sense of self-aware humor in this compilation of the first three books in her Princess Tales series. In The Fairy’s Mistake, twin sisters are given very special rewards by the fairy Ethelinda. Because of her kind and generous nature, Rosella finds jewels tumbling from her mouth whenever she speaks. However, when Myrtle demonstrates her selfish and careless nature, she finds bugs and snakes and other nasty things crawling out with her words. A handsome prince comes by and falls madly in love with Rosella and whisks her away to his castle, to live happily ever after. Right? Wrong. And that’s when things stop going according to Ethelinda’s plan. Rosella’s miserable. The prince is greedy and materialistic. Myrtle finds new and interesting uses for her ability. The good sister’s reward is more a punishment. The bad sister’s punishment is more a reward. Can one rather baffled fairy set things straight, or will the wrong people live happily ever after?

Then, in The Princess Test, Levine retells “The Princess and the Pea” by asking, “What if the princess in question wasn’t really a princess?” Lorelei is a blacksmith’s daughter with a profoundly accident-prone nature, whose only real talent is for embroidery. Any other task is liable to create havoc, or worse. Meanwhile, the monarchs of Biddle are searching for the perfect princess for their son, Prince Nicholas. To that end, they’ve devised a few tests to weed out any who don’t exactly suit their needs. When Lorelei accidentally becomes one of the royal testees, will she pass with flying colors, or fail over something as small as a pea?

Like the original fairy tales these stories are based upon, the characterization may seem lacking in places and the actual plotlines may be somewhat shallow, but that doesn’t erase any of the cleverness or charm. Fairy tales are universal, and reinventing them is easier attempted than succeeded. Luckily, Levine has a knack for keeping the core elements and telling an interesting story in the meantime. These stories are perfect for reading aloud, and I’m looking forward to reading the rest in the series at some point.