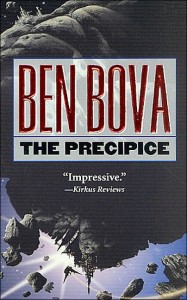 It seems as though I’m reviewing a new Ben Bova book in every column these days. There are several reasons for that. Not only is he one of science fiction’s best writers, he’s still a prolific one, releasing books with a pleasant frequency of late. With each new release, his system-spanning saga of the near future expands and ties together all the more intricately. Now, with The Precipice, Bova finally ties together a number of previously independent threads in that ongoing saga.

Once again, we’re introduced to the dynamic businessman and entrepreneur, Dan Randolph, last seen as the hero of Privateers and The Empire Builders. The ecological catastrophes predicted in those books have finally begun to strike in full force, and Dan’s years of work trying to prevent the worst seem to have failed. Floods and earthquakes are tearing civilization apart. As Randolph suffers an intensely personal loss, he also stands to face a financial defeat, as his company, Astro Manufacturing, stands on the brink of bankruptcy. Determined to save the world, Randolph is tempted into making a deal with the devil, who appears in the form of Martin Humphries, whose fabulous wealth and access to highly advanced technologies could turn the tide with a fanciful scheme to mine the asteroids for their mineral wealth. The plan could revitalize the industries, moving many of them off Earth altogether. Our future lies in the stars, and we might be able to correct the greenhouse effect after all.

Randolph is wise to Humphries’ ways, distrusting any such alliance or partnership with the greedy young tycoon. He fears for Astro Manufacturing’s independence, and his own personal safety. He pursues other possible avenues, to no avail. It looks like the partnership is a done deal. Randolph and Humphries will send a ship to the asteroids, and prove once and for all to a skeptical world that salvation can be found out there, not by blindly focusing on Earth alone. Even as the deal is concluded, Randolph is finding a way to get around it. It’s no problem for the man who once defied law as a space privateer. Aided by the inhabitants of the moon colony Selene (last seen in Moonrise and Moonwar), and backed by a pair of beautiful astronauts (one of whom is a spy for Humphries), he’ll hijack the fusion-propelled Starpower I and risk his life on one last gamble.

Espionage, financial maneuvering, sabotage, sacrifice, technological marvels, the drive of the human spirit, complex characterization, and the fate of the world all combine to make this a gripping, fast-paced and well-told addition to a much larger story. It’s billed as Book One of The Asteroid Wars, so clearly the story’s just begun. Dan Randolph will give his all to save a planet that has very little use or desire for him, and Martin Humphries will sacrifice anyone and anything to escape the hold of his tyrannical father, even Earth itself. Meanwhile, Pancho Lane wants nothing more than to protect her sister and make a living, and she’ll play both sides against the middle if she has to. Together, these three will change everything.

The Precipice is notable in part for connecting so many elements from other books in the same setting. Not only do we have Dan Randolph and the moon colony of Selene, but Martin Humphries has appeared before, or rather will appear as Van Humphries’ father in Venus, the catalyst for that book’s events. It contains Bova’s customary attention to detail, mixing richly-developed characters with hard science fiction action and adventure. Certainly, Ben Bova hasn’t lost any of his edge, and I recommend this book as highly as I do any of his other releases. I’ll be looking forward to the next in The Asteroid Wars to see how it all comes together.