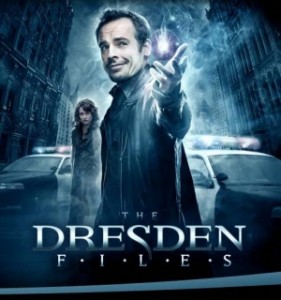 As I write this, I’ve watched the debut episode “Birds of a Feather” of The Dresden Files (starring Paul Blackthorne as the titular character) four times. I’ve finally managed to organize my thoughts on the matter. As a longtime fan of the novels this show is based upon, I was both excited and nervous to learn that the books had been optioned by the SciFi channel, which, to be honest, isn’t exactly known for its quality adaptations of literary properties, nor for the outstanding nature of its original TV-movies. As much as I wanted to see Harry Dresden done on screen, I knew the chances of a faithful, quality translation from book to television were low. I mean, come on, they screwed up Riverworld, for Pete’s sake! So I settled in to watch the first episode and tried to keep my mind open.

The basic concept remains the same as in the books: Harry Dresden is a wizard for hire, who advertises himself as such in the Chicago phonebook. He’s regularly tapped to assist or consult on bizarre cases by the Chicago police, most often by Lieutenant Murphy. He goes up against every manner of supernatural menace imaginable, often in an effort to protect the innocent and make the world a little safer. In these efforts he’s advised by a skull-dwelling spirit named Bob, who acts as a combination lab assistant and reference library. Harry’s basic family information hasn’t changed; his father was a stage magician, his mother died under mysterious circumstances. Heck, they even kept in Harry’s past with his former mentor, Justin DuMorne.

All of that is true to the books, but they did take liberties. When Bob appears, he’s an actual ghost (quite skillfully portrayed by Terrence Mann). Lieutenant Murphy’s first name is now Connie, and she’s played by Valerie Cruz, a Cuban-American actress — as opposed to the books, where Murphy is a petite blonde of Irish descent. Harry’s car, the much-beloved Blue Beetle, has changed from a VW Beetle to an old Jeep. Instead of living in a basement, Harry seems to have an actual apartment and his office is accessible right off the street. And the more I think about it, all of these are cosmetic changes that do nothing to affect the greater story. The heart and spirit of the series is present, and that’s what counts.

This first episode serves as an adequate introduction to the series, even though this was not the intended pilot episode. Harry’s in fine form as he attempts to unravel a bizarre magical murder, outwit a powerful evil and protect a child from the forces that would use or destroy him. I do wonder at how quick Harry is to initially dismiss his erstwhile client’s worries; after all, he better than anyone should know that even a kid’s ‘monsters under the bed’ can be real. But once he gets involved, he’s classic Harry: stubborn, determined, clever, and prone to being smacked around by nasties. Paul Blackthorne doesn’t make the strongest Harry around — James Marsters (Buffy the Vampire Slayer) was once considered to be a strong contender for the role, in part due to his narration of the audiobook adapations by Buzzy Multimedia — but Blackthorne is the sort of actor who grows on you after a while. What’s important is that he radiates a would-be heroic sincerity mixed with world-weariness, and in doing so the Harry Dresden spirit shines through more often than not.

Valerie Cruz comes off somewhat weak by comparison as Murphy, but I have every confidence she’ll grow into the role. She and Blackthorne still seem to be finding the right level of chemistry that the characters demand (after all, in the series Murphy is a potential love interest on occasion.) On the other hand, Terrence Mann is Bob the Skull, with an arrogant British superiority in his tone, radiating a fine mixture of reluctant subservience and irreverence. Were he just a voice, he’d be perfect. As a ghost, he brings plenty more to the role, including a full range of expressions. In my opinion, they really did the right thing in expanding his nature.

The plot itself is pure Dresden, right down to the involvement of such supernatural nasties as shapeshifting ravens and a skinwalker. While it would have been nice to see Harry use more of his magic, the show strikes the right balance between his mundane resources and his supernatural ones, and his final resolution to the problem at hand does smack of Dresden’s ‘blow things up when necessary’ nature. Thanks to the flashbacks to Harry’s youth, we’ve definitely gotten a good look at the events which made him the man he is today, with some hints at things to come.

There’s a lot I haven’t touched upon: Harry’s contact within the High Council (White Council in the books) who acts as a living search function for their records, the typical Dresden luck (he’s the sort of guy whose car gets booted for parking in the wrong place), the creepy nature of the skinwalker, and so forth.

But what really matters is one question: “Is this show any good?”

And thus it’s time to render a verdict. Yes, The Dresden Files is a good show. It’s not perfect, it’s not spectacular, and it’s not exactly what we might have been expecting. But it’s as faithful as it can be within the scope of accessibility, practicality, and logistics. For all intents and purposes, this is The Dresden Files translated to television. “Birds of a Feather” is a good start, and I’ll continue to watch the series as long as it can maintain this level (or greater) of dedication and entertainment.