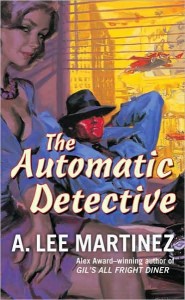 Mack Megaton isn’t your average joe on the street. He’s actually a reprogrammed robot built for destruction and world domination who, upon gaining free will, gave up his creator’s megalomanical ways and has gone straight, earning his citizenship one day at a time as an honest taxi driver in Empire City, where weird science reigns supreme. He’s not hero material, that’s for sure. Heck, he barely understands people, and he can’t even tie a bow tie. His therapist thinks he needs to work on his manual coordination, as well as getting out to interact with people more often. But hey, it’s hard for a seven foot tall ex-doomsday machine to get comfortable with people, you know?

That’s why, when Mack’s neighbors are menaced and kidnapped by persons unknown, Mack surprises himself by investigating the matter on his own, tracking down leads and poking in all of Empire City’s darkest corners. Little does he realize that his quest to save some innocent children will take him down paths long hidden, and bring him face to faceplate with the secret origins and true purpose of Empire City and its founders… and his own true nature. Along the way, he’ll have to deal with robot thugs, mutant criminals, little green masterminds, talking gorillas, and a classy dame who’d rather make time with a hulking exemplar of technology like Mack than with normal man. He might even save the city from certain destruction, and find a better job than taxi driver before he’s done.

The Automatic Detective is a hard-boiled, hard-wired, hard-riveted, hard-hitting blend of classic detective stories and science fiction, giving off a distinctly retro-futuristic vibe as it plays up the conventions of old school science fiction and mystery. All of the elements are here: a rough, two-fisted gumshoe who’s too tough to quit and too stubborn to give up, a beautiful woman who’s much more than she seems, a nasty bunch of bad guys who’ll stop at nothing to silence our hero for good, and of course, innocents in need of rescuing. A. Lee Martinez has proven quite skilled at the art of turning genre conventions on their ear in the past, and with this book, he draws upon the most fascinating aspects of two very different genres to create something new and interesting. The only series even close to this in tone would be John Zakour and Lawrence Ganem’s Zachary Johnson books, and those have a more humorous focus than this, which takes itself seriously (albeit in a rather tongue-in-cheek, self-aware manner… one can’t be too deathly serious when dealing with talking gorillas, mutants, or robot detectives, after all.) In The Automatic Detective, Martinez has created a memorable protagonist and a setting that definitely deserves further exploration in the future. Martinez doesn’t seem to be the sort of author who repeats himself, so only time will tell if we’ll see more of Mack Megaton. Regardless, I’ll be looking forward to whatever this author does next.