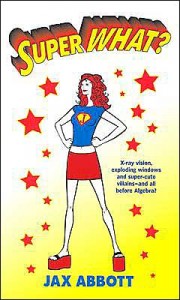 When Jessie Drummond develops superpowers during English class on the first day at her new high school, she figures her social life is doomed. After all, she was supposed to be the normal one in a family of secret superheroes, the only one in seven generations not to serve the cause of truth and justice in her spare time. Heck, she’d even gotten used to the idea of life as one of the Normals. But in an instant, it all changes. Now she’s forced to deal with her new powers (among them X-Ray vision, superhearing, superstrength, and superspeed), which means putting up with the overly strict standards of the League of Justice, at the same time she’s trying to figure out what guy to take to the Junior Prom. High school was never like this before!

SuperWhat? is a teen romantic comedy with a superheroic twist. It’s cute, and fun, and Jessie’s laid-back teen attitude is a refreshing contrast to the adult sensibilities of the heroes supervising her. In some ways, it’s as if The Princess Diaries met the Justice League. Thanks to the groundwork Abbott lays for future books, I’m looking forward to the sequel, and to Jessie’s further adventures in the world of teenage superheroism.