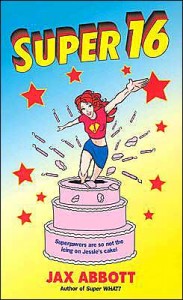 Welcome to the life of Jessie Drummond, teenage superhero-in-training. Just a few days shy of her sixteenth birthday, she’s the only person she knows who has to juggle a social life and training to get control over her emerging superpowers. The superstrength, superspeed, superhearing, and X-Ray vision are all nice, if a bit inconvenient at times, but she really could do without the scrutiny of the League of Liberty, whose standards of behavior are, shall we say, a bit overbearing and old-fashioned at times. Either she gets control of her abilities and passes her tests, or they’ll take her away for remedial training… which would seriously destroy what social life she has. She’s got a new boyfriend to get used to, friends who are seriously weirded out by her less-than-normal behavior of late, and did we mention the arsonist wandering around town? Or the totally evil orthodontist? It’s not easy being a teenager with these sorts of commitments. Luckily, Jessie’s willing to give it a shot.

Super 16 is a cute teenage romantic comedy, and it makes for fun, if somewhat inconsequential reading, with a style best described as “light and fluffy.” The best part of the book has to be the characterization of Jessie, and the way she expresses herself in her League-mandated blog, where she can let her tendency to drift off-topic run wild. (Hair-strengthening ray guns? Anyway…) As books of this ilk go, Super 16 is thoroughly enjoyable, though very clearly aimed at a specific audience. I hope we’ll see more in the series, as I suspect we’re far from done with Jessie’s story.