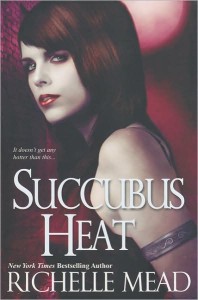 It’s not easy being a succubus in love. Worse still to be a succubus still suffering from a painful breakup with the love of her life. With author Seth Mortenson out of her love life (and now dating one of her mortal coworkers), Georgina Kincaid has, to put it mildly, developed an attitude problem. After Georgina sleeps with her therapist for a quick energy fix, her demonic boss Jerome decides that it’s time for a scenery change. And off Georgina goes to Vancouver, Canada, to help another demon deal with an embarrassing case of Satanic cult in the area. Canada. Land of Tim Hortons.

Of course, things don’t go easily at all. The cultists may be idiots, but there’s a genuine supernatural entity manipulating them, and Georgina suspects it’s all part of demonic politics and jockeying for territory. Her fears are confirmed when Jerome vanishes, leaving Seattle without a demon-in-charge and the immortals under his control powerless. Just like that, Georgina loses her powers and succubus need for life energy, making her closer to human than she’s been in many centuries. While her vampire coworkers go off to try and get a tan, Georgina throws herself into finding Jerome and solving the mystery of his disappearance. But was it Cedric from Vancouver, or Janette from Portland, or some other demon that would benefit from a little local reorganization? And how does the Army of Darkness fit into the plan? To further complicate matters, Georgina and Seth are drawn back to one another, even though he’s dating Maddy and Georgina is sleeping with bad boy magician Dante. Can they resist temptation, or will Georgina’s newfound ability to get physical without sucking out life force be enough to justify rekindle the flames of passion?

In Succubus Heat, we get to see our heroine at her most vulnerable, emotionally, physically, and supernaturally, but it doesn’t slow her down for long. Even bereft of her powers, she’s still following her nature, trying to do the right thing for her friends even though she’s technically a creature of evil. One thing you can say about Georgina: she’s predictable. Also loyal, stubborn, foolhardy and impulsive. You just know she’s going to make some dumb mistakes along the way, which is half the fun. And when the men in her life all manage to converge, it’s not just her dating life that’s going to take the hit.

It’s the little touches which continue to make this series fun, like Georgina’s mortal job as a bookstore manager, and her love for cats and salsa dancing. Or Jerome’s insistence on looking like John Cusack. Or the vampires who hit the beach when their nocturnal status is temporarily negated. Or the Army of Darkness and their lame Satanic-worshipping pranks. Or Tawny, the world’s worst succubus. Or Carter, the grunge-wearing angel who has a special interest in Georgina’s fate. Things like this really make the world memorable and entertaining.

There’s a genuine mystery underlying the plot here. That, coupled with adept characterization, some intensely hot sex scenes (what else do you expect when a succubus is involved), and wry humor, makes Succubus Heat as enjoyable as its predecessors in the series, and worth checking out. I’m still interested to see just where Richelle Mead plans to take things in books to come. I suspect it won’t be what any of us expect.