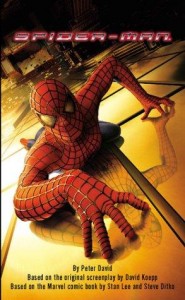 The story has become a modern day myth. A young man is granted extraordinary powers through a chance accident, and becomes one of the greatest heroes of his generation. Twist it a little, and it could be a Greek myth, or an Arthurian legend.

But instead, this is a new myth, one for the 20th century, concerning part of a new pantheon of brightly colored gods.

How many people don’t know the basics of the Spider-Man origin? Peter Parker, left an orphan after the death of his parents, moves in with his Aunt May and Uncle Ben, who raise him as though he were their own child. Weak, bespectacled, considered a geek and a nerd by his classmates, he takes refuge in science and school. Then, one day, he’s bitten by a radioactive spider, and his world changes.

He’s granted the proportionate powers of the spider: strength, speed, agility, the ability to stick to walls, a mysterious sixth sense warning him of danger, even the ability to spin superstrong webs. Fashioning a gaudy costume, he first tries to go into show business, but all of that falls by the wayside after a moment of selfishness on his part lets a burglar escape … a burglar who later kills Peter’s beloved Uncle Ben.

In a single instant, Spider-Man dedicates his life to heroism, under the motto, “With Great Power Comes Great Responsibility.” And decades later, he’s one of Marvel Comics’ best-loved and most popular characters, the star of comics, TV, and now film.

The book in question, Spider-Man, is the official novelization of the soon-to-be-released major motion picture starring Tobey Maguire, Kirsten Dunst, and Willem Dafoe, directed by Sam Raini. The hype has been huge, the anticipation great, especially after the popularity of the last two films based on Marvel comic books: X-Men and Blade.

I have to say, Peter David was a perfect choice for taking on the task of turning the movie about a comic character into a successful novel. Spider-Man is essentially two steps removed from his origins at this point, having been run through the filter of a screenplay and then into prose form. This isn’t your parents’ Spider-Man. This is a reinvention and reexamination from the ground up. Not having seen the movie, I can’t judge how true he is to that presentation, but that doesn’t matter. Peter David turns in one of the finest, most pure interpretations of Spider-Man done in the past few decades.

The characters are all there, and recognizable: Peter Parker. Aunt May. Uncle Ben. Mary Jane Watson. Norman Osborn. Flash Thompson. J. Jonah Jameson. Familiar names all to those who follow the comic. Well, let’s just say that if I wanted to start someone on the character, I could do little better than to give him a copy of this book. Now only does Peter David hit the characters just right, he gives them depth, going into details above and beyond what the movie can convey. Aunt May is caring, a little frail, but tough enough to take care of a rambunctious teenager. Mary Jane is the beautiful, carefree girl everyone wants, hiding her pain deep within. Harry Osborn desperately seeks his father’s approval, even as Norman descends into madness. Peter struggles with loneliness and guilt, and then the confusion and later euphoria of his newfound powers.

The action scenes are pure gold, as cinematic as if they truly were on the big screen. You can see yourself right there in the middle of things.

The only drawback, and this isn’t even a drawback at all, is that Peter David, long known for his humorous writing, slips in no few in-jokes, in the form of sly comments or cleverly named supporting characters. For those in the know, it’s a forehead-slapping moment. For those not in the know, it’s a tiny speedbump. However, we can allow the author his minor quirks, in exchange for such a good story. He spent quite some time writing Spider-Man comics, and it’s obvious he hasn’t lost that innate feel for the character.

I can’t comment too much on the plot without giving away what I assume will be the plot of the movie. But all the basics are there, and Peter David has accomplished the unenviable task of turning a novelization into a true novel.

Spider-Man is one of the best looks at the character I’ve seen in a long time. Rebuilt and streamlined from the ground up, this is pure modern-day myth featuring several gods of the pop culture pantheon. I’m well and truly looking forward to the movie.