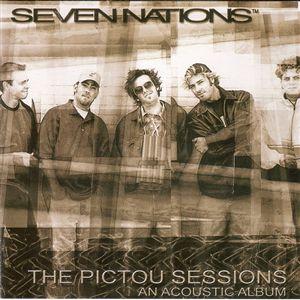 It could only have been serendipity at work. I only found out that Seven Nations was performing near me less than six hours before the show. If I hadn’t been listening to the radio, I wouldn’t even have been -that- lucky. As it was, I cleared my schedule in a hurry, and hithered away to the Coffee Pot, one of Roanoke’s quirkier and cooler music spots, best known for the giant coffeepot decoration that stands outside. I’ve been in Roanoke for seven years now and this is the first time I’ve ever actually been to the Coffee Pot, but I suspect I’ll go back often.

Rather than try to re-encapsulate the history and success of Seven Nations, I’ll point you to our previous reviews (The Factory and Seven Nations), and their own site. I’m not going anywhere. Go on, read. Familiarize yourself. Embrace the unusual blend of Celtic, rock, pop, thrash, traditional, and eclectic that is Seven Nations. Comprehend that these guys are the real thing, a quintet of hard-playing, hard-traveling musicians who can rock the house, whether it’s a crowd of 15, or 15,000. Dig it? I was already a fan, based on their previous albums. I wasn’t about to pass up a chance to see them play in my hometown.

The evening started on a slow note, with a warmup act dredged from one of the local radio stations. Unfortunately, I can only wonder who this performer had naked pictures of, for as warmup acts go, he was…lukewarm. Though technically competent with the acoustic guitar, his vocal skills were enthusiastic but anguished, tormenting songs such as “Last Dance With Mary Jane,” and “Whiskey In The Jar” (as done by Metallica). My friends and I were torn between applauding to celebrate when he was done, and not applauding in the fear that it might encourage him. Note that he remains nameless. This is on purpose.

Though the show was scheduled to start at 8 pm, it wasn’t until 9 that Seven Nations, five men strong, took the stage in all their glory. That was the last time for several hours that I was able to stay still. They immediately launched into an energetic number, which so capivated me I completely forgot to note which one it was. All I remember now is that it caught my attention, and didn’t give it back. Following a brief debate on whether the band had ever actually been to Roanoke before (nope), they segued into “The Factory Song,” the title track from The Factory, which invoked my FHL (Faster, Harder, Louder) quotient for the first, but certainly not the last, time of the night. I couldn’t keep my foot from tapping, or my head from bobbing.

To slow things down a little, they then did “This Season,” also from The Factory (As they explained, they’d be doing a bunch from that particular album; it’s the only one they had left to sell, after selling out of the rest in Richmond and L.A.). In between numbers, they happily joked around with the audience, talking about their rough schedule and showing some feigned confusion as to what day it was. After that, they threw themselves into a traditional set, described only as “3 slip-jigs and a reel” and believe me, they didn’t hold back. I was convinced that fiddler Dan Stacey’s fingers would fall off, or his fiddle would catch on fire, the way he was going. Happily, neither of those occured.

Notable quote of the evening: “Don’t be the Freebird Guy.” This, naturally, came about because when they started asking what they should play, there was the inevitable call of “Freebird,” which naturally invoked the question of what said song would sound like if done with bagpipes. Thank goodness, they didn’t try it. Instead, we were treated to “The Big Yellow Bus,” a balladesque tune inspired by John Lennon’s death. Then, for some strange reason, the group started swapping cat anecdotes… Clearly, they were having as much fun as the audience, and loving every minute, and the mood was contagious.

Perhaps fearing reprisals for what they were about to do, four of the five fled the stage, leaving the incomparable Scott Long to perform a bagpipe solo that was hypnotic both in its discordance and in its creativity. Even now, the memory fades, leaving me only with the knowledge that I experienced something rare and beautiful. I bow down to the Bagpipe Gods.

Then there was the Macarena Incident. In a true fit of whimsy, the band decided to try and play the Macarena…this incident is never to be spoken of again. It was just too surreal. However, making up for it was the brilliant fiddle solo by Dan Stacey, accompanied in the latter half by drummer Crisco, who contributes heavily to the overall energy and sheer power of Seven Nations. And as the rest of the group returned from taking a brief break, they kicked up the FHL level to the degree needed to get Dan to step-dance. My god, if I wasn’t straight….er, anyway, it was simply fantastic. They wound down with a slow number, but were convinced to come back on stage for an encore, for which they did “Waiting For Midnight” from their latest album And now it’s come to this.

Though I’ve primarily talked about Dan, Crisco, and Scott, I’d be lax if I didn’t mention Struby (acoustic and electric bass guitar and heavy rhythm), and Kirk McLead (lead singer, songwriter, guitarist, and driving force), for it’s only through the collective efforts of all five that the show was such an awesome experience. I went in expecting a good show, and my expectations were simply blown away by the sheer energy and talent of Seven Nations. I don’t think I stopped moving, whether it was toe-tapping, head-bobbing, or outright clapping and hollering, the entire time they were on stage, and I wasn’t alone in my enthusiastic response. The crowd loved these guys with a passion. The Coffee Pot’s not a large venue; maybe a hundred people all told were there (though I’m bad at guesstimating these things) and it was fairly well packed.

All in all, if I’d missed this show, I would have kicked myself severely, and I’m glad I caught it. Seven Nations is on the road a -lot-, so check their site to see if they’re coming your way. You won’t regret it.