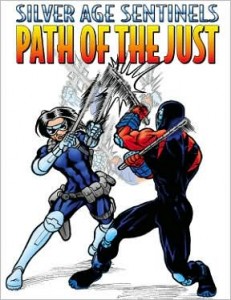 When I received this, I was hoping it would be along the lines of the excellent anthology, Superheroes, edited by John Varley and Alicia Mainhardt (Ace, 1995). Based on the roleplaying game Silver Age Sentinels, Path of the Just contains fifteen stories of superheroes and villains, all set in a shared universe and primarily based in the fictional Empire City. Now, superhero fiction is hard enough to do normally; four-color exploits don’t necessarily lend themselves well to simple prose. Path of the Just suffers somewhat from its origins with a roleplaying game; as with any such spinoff, there’s the image that one needs to be familiar with the game in question. The common threads linking the stories constantly hint at a much larger background and theme, without actually filling in some of the necessary blanks regarding history, origins, or even the nature of some teams. Furthermore, I found it somewhat confusing that some of the “signature characters” so prominently mentioned on the cover don’t even appear in this collection. I can only surmise that these are important to the game, if not the fiction.
Those quibbles aside, every story has its strengths, while some stand head and shoulders above the rest. My personal favorites had to be Steven Grant’s “Citizens,” in which a demoralized supervillain gets one last shot at a legendary vigilante hero, and “Ion Shells” by Steven Harper, which looks at an unusual relationship blossoming between a superhuman thief, and the hero who keeps running afoul of him. John Ostrander’s “Hardball” tells a story of courage and determination heedless of sacrifice, and J. Allen Thomas’ “Decisions” focuses not upon the superhumans, but on the humans affected by their actions. “Covalent Bonds,” by Erika Schippers, studies an unusual woman, and her bar, which acts as neutral territory for supervillains. Robin Laws gives us “The Final Equation,” in which a hero is granted one last talk with a notorious killer and learns some very dark history. Both moralistic and metafictional, it’s an odd piece that doesn’t quite sit right in relation to some of the other stories. “Apocalypse” by Daniel Ksenych is both one of the most promising and most frustrating offerings, focusing on a semi-reformed villainess and the hero team that’s given her shelter. The story hints at so much more to the setting, and yet explains so little.
I’m sure fans of the game will love this book. Also, it’ll appeal to comic book fans, and those left hanging when the steady stream of Marvel Comics-based fiction all but dried up completely. I am looking forward to the next collection from this publisher, if just to see what other stories they have to tell.