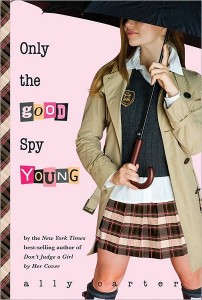 Cammie Morgan is a Gallagher Girl, and like every teenage girl studying at the illustrious private school, she’s in training to become a spy. Unfortunately, Cammie has a real knack for getting involved in trouble way past her skill level, and it’s been a real struggle to stay alive this far, thanks to her own wits and her friends’ talents. Now it’s looking as though the key to her current troubles may lie with her father, who’s been dead for years. Worse, one of her favorite teachers has apparently gone rogue, and is being hunted as a traitor.

If Cammie wants answers, she’ll need to go with her gut instincts, even if it means speaking with the enemy, infiltrating her own school’s secret archives, and risking her life time and again. But hey, high school’s where the memories are made, right? It’s just that most memories don’t involve battling terrorists, sneaking past lethal traps, dodging bullets, and praying that the boy you like isn’t about to literally stab you in the back.

I’ve been a fan of this series all along. It’s action-packed, fast-paced, filled with a good-natured and whole-hearted chemistry between Cammie and her closest friends, and there’s never a dull moment. While the underlying concept itself is a tad far-fetched, it’s easy to get caught up in the girl-power super spy adventures, and to root for Cammie, Liz, Bex, and Macey. The Gallagher Girls series appeals on a number of levels, and here’s hoping it stays strong for a while to come.