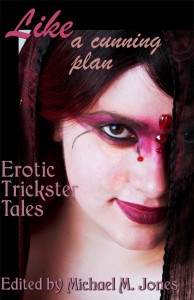 I am pleased–no, honored–no, thrilled–no, ecstatic to announce that my second first anthology is now available for download from Amazon, and shall shortly be available via all other major online retailers as they process in the system.

Like A Cunning Plan: Erotic Trickster Tales is many things.  It’s my first anthology to actually see a release date.  It’s my first official anthology as an editor for Circlet Press. It’s my first erotica anthology. It’s my “second” first because I started Scheherazade’s Facade way earlier, but well, things happened, and we all know that story by now…. And like they say, you never forget your first. Unless you were really, really drunk that night and things happened that you’ll always regret missing out on, especially when you woke up in a Tijuana gutter with an embarrassing new  tattoo instead of pants.  This is not a true story, by the way.

I learned a lot about editing as I worked through this collection, tips and tricks which ultimately made me much better as the whole editing thing, skills I’ve since put to use finetuning and finessing Scheherazade’s Facade.  I also learned that if you even jokingly make a pact with Coyote and he expects you to produce an anthology in his honor, you’d better deliver or else weird things start happening.  Like, for example, the time I went looking for an “Adult” store in Richmond, and not one, not two, but THREE stores ceased to exist for as long as I was looking, and I was only there for research purposes, honest, but still….

But I digress.  The important thing is that I HAVE AN ANTHOLOGY I AM A REAL EDITOR THIS THING HAS MY NAME ON THE COVER LOOK AT THE PRETTY COVER THIS IS AMAZING AND–

*cough* Like A Cunning Plan goes live on the Circlet site on June 19th, but it’s totally available.  Join me in celebrating playful, tricksy, unpredictable, tables-turning, eyebrow raising good times with gods and mortals, shapeshifters and kitsune. More details available on its own dedicated page here.

Review copies are available for any who promise to leave a review–good, bad, indifferent– on Amazon or Goodreads or local billboards.  Just drop me a note.

Now then.  I must Muppet-flail and scare the cats.