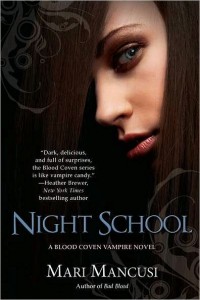 Twins Sunny and Rayne are anything but normal. They’re both dating vampires, while Rayne is both vampire and slayer at the same time. And now, according to their parents, they’re both fairy princesses … and that part of the family’s come to collect them. For their own safety, the girls are sent to stay at the remote Riverdale Academy, a school for slayers. As Riverdale proves full of surprises, Rayne’s forced to hide her true nature with no way to feed. With fairies, vampires, and traitors galore, disaster is inevitable. Only Mancusi could make this increasingly bizarre set of circumstances work so well, as one twist after another is introduced. The end result is a past-paced, quirky, fun continuation of the series that’s sure to keep fans amused.